Computer Science student Mitchell Grout from Gisborne is the fourth child in his family to do postgraduate study at the University of Waikato. Two of his siblings are currently working towards their PhDs and a third has graduated with a masters degree.

Now Mitchell, who’s just completed an honours year to add to his Bachelor of Computing and Mathematical Sciences, has been awarded the Sir William Gallagher Cyber Security Scholarship worth up to $25,000, setting him up to complete his Master of Cyber Security (MCS).

“I’d been thinking about doing a masters, was toying with the idea, but then I won the scholarship and that sealed it for me,” he says. At the moment Mitchell’s doing a software internship at LIC – the dairy herd improvement and agri-technology co-operative based in Hamilton. He’s working in R&D on image detection, predicting the location of cows.

His honours study focussed on cryptanalysis, the study of analysing information systems to find hidden aspects of the systems. “I plan to pitch some ideas to Gallagher as I’d quite like to carry on with research in cryptanalysis for my masters, but Gallagher has the final say on my study topic. It’s got to be something that benefits or informs that company,” Mitchell says.

Mitchell went to Gisborne Boys’ High School and says he chose to study at Waikato University for two reasons – the university’s reputation for quality computer science and because he had family studying there already.  “I did computer science because it suited my strengths, and then found it to be fun, and now I’ve started leaning towards cyber security.”

The University of Waikato was the first university in New Zealand to offer a Master of Cyber Security. It gives students an understanding of the technical, legal, policy and management aspects of cyber security. Students learn cloud computing technologies and computer infrastructure, as well as the laws relating to cyber security.

The Sir William Gallagher Cyber Security Scholarship was established in 2015 to support academically talented students studying towards a Master of Cyber Security (MCS) qualification at the University of Waikato. The value of the scholarship is up to $25,000 to cover tuition fees and a stipend.

Sir William Gallagher helped open the University's cyber security lab in 2013 and Gallagher is a partner in the MBIE-funded STRATUS project (Security Technologies Returning Accountability, Transparency and User-centric Services in the Cloud) headed by Waikato. 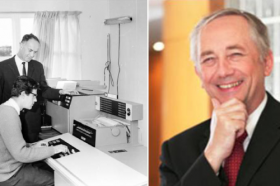