US ambassador drops in

US Ambassador to New Zealand Scott Brown invited himself to the University of Waikato today, keen to find out what was being done by staff and students in the areas of cyber security and crime science.

Mr Brown, a former US senator, lawyer and military man, was known as the most bipartisan senator during his time in office and worked extensively on sex offender, child trafficking and other law enforcement issues to keep children and families safe.

During his campus visit, Mr Brown met several postgraduate students to find out about their research, and had a sit-down chat with the new senior lecturer of the Institute for Security and Crime Science Dr Justin Kurland, himself an American and relative newcomer to New Zealand.

Mr Brown appeared genuinely interested in the subjects the students were researching and said he’d be curious to come back in a year to check their progress.

US ambassador drops in is licensed under a Creative Commons Attribution 4.0 International License. 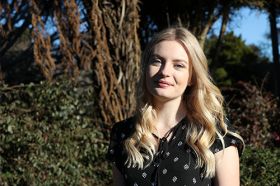 Taking on the world in cyber security