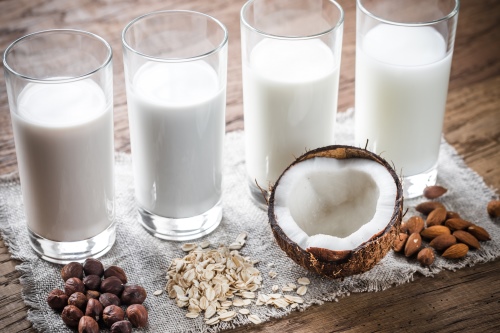 At a conference about disruptive innovations in food production last week, dairy industry spokespeople criticised the “milk” labelling of non-dairy products such as almond or rice milks.

Federated Farmers, a rural advocacy group, prompted media headlines with a suggestion that we should call a beverage made from almonds almond juice because it is “definitely not a milk under the definition in the Oxford dictionary”.

In a similar vein, the chief science officer for the dairy cooperative Fonterra, the world’s largest dairy exporter, said:

These plant-based milks have a positioning that says they are milk and that they are plant-based. Unfortunately, from a content basis, they are providing inferior nutrition compared to what you find in dairy products.

Their position is that labelling plant-based beverages as milk is misleading consumers into buying nutritionally inferior products. This position is gaining momentum around the world. The US Food and Drug Administration (FDA) is considering making “milk” a label exclusive to dairy products. And the European Court of Justice has already upheld a law restricting the use of dairy terms on soy products (even though almond milk is exempt).

We disagree. Calling the product “almond milk” makes sense and doesn’t mislead anyone.

“An almond doesn’t lactate,” according to FDA Commissioner Scott Gottlieb, so almonds cannot be milked. But defining milk by its method of production won’t cut it. The US-based company Perfect Day, for example, makes dairy products without the involvement of any udders or even cows. They genetically modified a protein-creating microorganism to produce the same proteins found in cow’s milk: casein and whey.

A more useful way to define something is to look at its intended function. Consider a mouse trap. A mouse trap is a thing that is designed to trap mice. These traps use various materials and trapping mechanisms, but these differences don’t matter. The function of all these traps is the same, so they are all “mouse traps”.

Almond milk and other plant-based beverages function as milks. They go well with cereal, can be consumed by themselves, and provide nutrition. In fact, almond milk has been used widely as an animal milk substitute since the middle ages. Plant-based milks do what animal milks do, with the advantage of being acceptable for people who cannot or do not want to consume animal milks.

As soon as a nutrition threshold is set for milk, plant-based beverages could be fortified with additives until they became milks. Some soy milks are already fortified with calcium and nutrients to aid calcium absorption. Emulating the higher levels of protein and certain vitamins and minerals (but presumably not fat and sugars) might not be too challenging, especially given the impressive, ongoing advances in food technology.

Given that almond milk performs all of the milk functions we expect, including having some nutritional value, it makes sense to call it “milk”.

Even if you don’t like functional definitions, consumers are not being misled by product names like “almond milk”. Consumers don’t think that peanut butter has dairy butter in it. They also don’t think that almond milk is cows’ milk with almond flavouring.

The companies making almond milk should not want consumers to think their product has dairy in it. Many consumers of plant-based milks choose them because they want milk but not the dairy-related moral or dietary problems that come with it. If many people believed that almond milks contained dairy, the companies would quickly change the name to almond juice.

Read more: The future of meat is shifting to plant-based products

Being misled about a product can have harmful effects. Requiring cars to be sold with a recent warrant of fitness is important because it can prevent the expensive mistake of “buying a lemon”. Labelling poisons as such is even more important because poison-related consumer mistakes could be deadly. But we need to find a workable balance between adequately protecting consumers and not placing too many burdens on producers.

Consumers realise that almonds don’t lactate, and that plant-based milks are designed to be functional alternatives to animal-based milks. So, the name “almond milk” doesn’t mislead anyone.