The ongoing Jamie-Lee Ross saga is a local example of dirty politics, but is such negativity an effective means of winning elections?

That’s one of the questions University of Waikato Tauranga based political scientist Justin Phillips is examining.

Mr Phillips has been looking at the effect of negativity on television and on social media in the United States.  Candidates quite clearly seem to think it can win elections, given the multi-million dollar industry it has become, but researchers have struggled to find evidence to affirm this belief.  In an effort to contribute to this search, he has married his interest in politics with a former life as a programmer. “I end up doing quite a lot of big data analysis. With social media data for example, you can have hundreds of millions of observations of citizens’ responses to candidate attacks, which might offer further insight into why candidates think negativity works but researchers remain unconvinced.”

New Zealanders are currently less exposed to political attack than Americans,  Mr Phillips says this is likely to be due to far more stringent campaign finance restraints. “The normalising of political attacks in the American context - through international media coverage - means they might very well become normalised here to some degree.  Political environments are clearly changing quite dramatically in western democracies for a variety of reasons, and with such change comes the inevitable friction of negativity. One might suggest the endearing optimism of someone like Jacinda Ardern might prevail, but the reality might be quite the opposite. If, for example, Simon Bridges doesn’t survive, and someone like Judith Collins takes over, we may find the political atmosphere in New Zealand takes on a more negative tone.”

Leadership matters, but the transition to new media as a method of political persuasion might also play an important role in increasing negativity. Dr Phillips says one only needs to scroll through online comments sections to see potential examples of this in action.  “Any number of reasons might be responsible for increasing negativity online, many of them relating to the psychology behind negative emotions and political behavior.  But the social media platforms are also unique in that they give us content based on preferences previously exhibited.  The more we like negativity, the more we’ll see it on our news feeds.  If this is the new norm of how we publicly communicate, it is going to make its way into everything.”

Such big data analysis can be a bit daunting, though. “The end result is that we can only answer small and important questions: Is an attack effective? Do some react differently than others to it?  There simply isn’t enough time for any one person to ever fully know what exists within datasets of this size.  In some cases, it is quite humbling.” 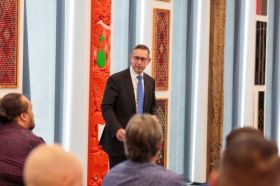