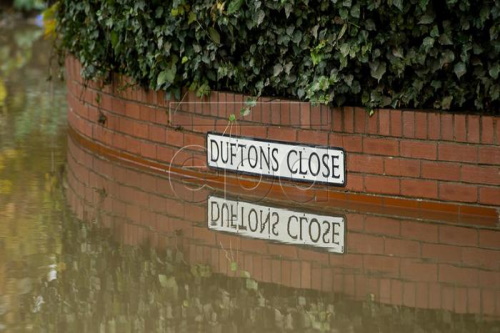 Conisborough is among multiple towns and villages heavily affected by flooding along the River Don.

After severe flooding in the North of England, many affected residents have been left feeling let down and left behind by the systems in place to protect them. Our research suggests that they, and many other communities affected by flooding in the past, have good reason to feel this way.

Often, the effects of flooding are not fair – and government policy isn’t helping. Current methods of modelling, managing and protecting against flood risk are socially blind, and end up disadvantaging the people and places that are most vulnerable.

In recent years, flood management policy across the world has focused investment on technology to better assess which areas are at risk of flooding, and what the damage could be. This technical expertise can then be used to inform vulnerable people, guide development, and determine priority areas for flood defences.

Undoubtedly, innovation in flood risk assessments over the last two decades has aided decision-making for central government agencies and local authorities. We have a much better, if still far from perfect, understanding of the movement of water through catchments, urban drainage systems, streets and buildings.

But this approach has limitations. For a start, flood maps tend to be static snapshots that are only periodically updated. In reality, risk can change quickly. As the climate crisis increases the frequency and severity of flooding, and urbanisation reduces the land’s capacity to absorb water, people may be surprised to learn that houses they bought many years ago are now at risk – not because they moved to a flood-prone area, but because the flood zone moved to them.

More importantly, these technical models typically treat flood-prone areas as uniform entities that are simplistically labelled as at high, medium, or low risk. In turn, government policy across Europe and beyond increasingly expects people at risk to assume more responsibility for managing it, usually referring to this as becoming resilient. For example, the UK government encourages the public to check their postcode on simplified versions of flood maps, to inform choices on insurance or house purchases, increase their awareness of risk, and be prepared if in a higher-risk area.

But people have very different capacities to make use of this information. For example, those with lower incomes may be less able to protect, repair or insure their properties, meaning they feel the effects of flooding much more acutely.

Some people are also more vulnerable than others in ways that may not be immediately obvious. Extreme weather events are likely to have a greater effect on older people and those with health problems. Those with limited mobility are less able to evacuate from a flooded area or move possessions away in expectation of a flood.

More broadly, the varying economic health of areas entrenches inequality in vulnerability to flooding. Put simply, people from more deprived areas that are prone to flooding may not only be more vulnerable to its effects, but are often less able to lobby for flood defences or media attention than those in wealthier areas. They also have fewer means to leave flood prone areas for a safer place to live.

The often overlooked yet troubling irony is that globally it is those who have contributed least to the causes of flooding and have the least capacity to adapt that are most at risk. And of course, flooding rarely happens just once in an area – people and places can be trapped in cycles of flooding, further exacerbating inequality and disadvantage.

Decisions about where to invest in flood defences are also problematic. They are usually based on simple cost-benefit analyses, which means that assessments of how many people might be protected and the value of protected assets rule decision-making processes.

Many analyses have some degree of social weighting to ensure that wealthy areas with higher house prices or areas with larger populations do not monopolise finite budgets. But only rarely are more fine-grained social circumstances, such as people’s ability to escape from rising water and their capacity to deal with the consequences of a flood, integrated into decision-making.

In response, flood risk management researchers and professionals increasingly argue for more engagement and collaboration with those at risk. But even here, there is a risk that the simple provision of more opportunities to participate could favour those with resources, expertise and time – the very same people who are arguably already well represented in the processes of public decision-making.

That is not to criticise vocal and well organised community participation. Such participation is essential and must be supported. But to truly realise social and environmental justice and prevent communities suffering in silence, targeted outreach is needed. This could include recruiting independent support workers who can be community advocates for vulnerable neighbourhoods, and helping establish local flood action groups to liaise between authorities and the wider public.

There are ways to make flooding fairer. Public authorities sit on a vast wealth of social, economic and demographic data that should be fully integrated with flood risk management decision-making, and regularly updated. The mapping tools to overlay these data with flood maps already exist, but there is concern that these are not being widely used.

Read more:
Why flooding is still so difficult to predict and prepare for

Flood risk managers and emergency first responders should also do more to understand these nuances. They could, for example, expand recent efforts to help communities develop their own specific flood response plans, use their local knowledge to identify the most vulnerable people, and determine ahead of time how they can be supported when flood warnings are issued.

Finally, we need to recognise that fairness in flooding is linked to broader economic and social conditions. Austerity politics and funding cuts to local services can severely compromise people’s ability to deal with flooding.

In the UK, spending on flood defences has fallen well shy of the pre-austerity trend – and this is sure to have impacted residents in the North of England. Our ongoing work shows that many communities affected by flooding feel ignored long before rising waters destroy their homes, businesses and neighbourhoods.

Those most vulnerable to flooding must be given the resources to respond to it, rather than being told that it’s their responsibility to get resilient. This support is not only needed before and during flooding events, but also for the longer-term effects that are often only apparent weeks and months after waters have subsided. Just as our assessment of flood risk is getting more sophisticated, so must our management of it.

Click here to subscribe to our climate action newsletter. Climate change is inevitable. Our response to it isn’t.