Sir Edmund Hillary scholar Claudia Ashby got into swimming after her parents saved a child from drowning. And it was her swimming success and academic achievements that scored Claudia a Hillary Scholarship to attend the University of Waikato.

Now Claudia has won a Step Higher Award that will take her Nepal this week. She’s one of four Waikato students who will switch summer for snow and high altitudes, following in the footsteps of mountaineer and explorer Sir Edmund Hillary. The students will be trekking to Ama Dablam Base Camp, fundraising for the Himalayan Trust and working in local schools and hospitals.

“I’m keen to see the work that the Himalayan Trust has done to better the lives of people in Nepal. It will be great to visit local schools and hospitals and find out how the conditions have changed since the Trust was established in 1960.”

She’s had to fundraise for the trip, and last month she organised a group of people to climb their own Everest – each of them getting sponsorship to climb the Hakarimata Steps in Ngaruawahia.

The former Sacred Heart Girls’ College student became a Hillary scholar at the University of Waikato in 2017 and heard about the Step Higher Award at her Hillary induction. “As well as the financial support, the Hillary Scholarship has also helped with university support around managing studies with training and competing,” she says.

Claudia’s been swimming for nine years. "My parents were adamant that my brother Bradlee and I would have swimming lessons because they once saved a kid from drowning next door. The swimming lessons didn’t start off as competitive but I was inspired by my brother who’s three years older than me, and I decided to get involved too.” Bradlee represented New Zealand at the 2016 Rio Olympics.

In 2016 Claudia was the best performing New Zealander in the World Junior Open Water Championships that competed in the Netherlands. “It was one of my proudest achievements. I’m half-Dutch so it was pretty cool that it was in Holland. My grandparents immigrated here when they younger and none of us had ever been to Holland before so it was really cool.”

Despite spending most of her time around pools training and teaching, it’s open water that Claudia truly loves. “In a pool you’re always looking down at the same thing. Open water is so different. I’ve seen so much of New Zealand and other countries through open-water races. I have swum across the Auckland Harbour; not many people get to say they’ve done that.”

Claudia will graduate with a Bachelor of Health, Sport and Human Performance this year and hopes to return to complete a masters degree.

When she first arrived at university, Claudia had to overcome her fear of uncertainty and isolation. For future students, Claudia has one piece of advice. “Try and take every opportunity you can. Communicate with your lecturers and try not to stay under the radar.”

The University of Waikato Sir Edmund Hillary Scholarships were established in 2005. Each scholarship is worth up to $10,000 a year for full-time undergraduate enrolment. Recipients receive personalised academic support, access to leading sports coaches and arts tutors, and a tailored leadership and personal development programme.

High and dry is licensed under a Creative Commons Attribution 4.0 International License. 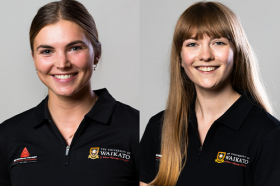