It runs in the family

With a surname like Field, it’s no surprise that Hawke’s Bay brothers James and Joey are both star cricketers. And now they’re both Sir Edmund Hillary scholars, along with another sibling pair: award-winning cycling sisters Nina and Ally Wollaston.

“After seeing what an amazing experience James had as a Hillary scholar, choosing Waikato was an easy choice,” Joey says. “The Sir Edmund Hillary Programme offers really good support and allows you to develop, improve your skills, and give back to your community.”

Joey has been playing cricket in the family backyard since he was three, and enjoys the physical and mental challenge of the sport. He’s stacked up a long list of achievements, including winning last year’s Under 17 Indoor Cricket World Cup and being selected for the National Under 19 cricket squad that will tour Bangladesh this year.

The former Hastings Boys’ High School head boy and Hawke’s Bay Male Cricketer of the Year is studying for a Bachelor of Health, Sport and Human Performance, majoring in Human Performance Science and Psychology. Alongside ambitions of being a Black Cap, Joey would like to work in high performance athlete development and nutrition.

His older brother James took the business route, recently graduating with a Bachelor of Business Analysis, majoring in Accounting and Economics. He managed to balance his cricket commitments with studies and internships, and is now working as a graduate accountant at Vazey Child Ltd in Hamilton. Once he’s worked through his Chartered Accountancy papers, James will head to England to play cricket.

For cyclist and Bachelor of Laws student Ally Wollaston, the decision to start at the University of Waikato was a no-brainer. “The University offers a community that fosters and encourages sporting excellence – this is an advantage for my cycling career and that was hard to look past,” Ally says.

Ally’s been cycling for eight years, inspired to start when her sister Nina became involved with the sport. Last year, the former St Peter's Cambridge prefect won five national titles and a silver medal at the Junior World Championships in Switzerland. Alongside a career in law, she’s hoping to cement a spot in the New Zealand Women’s Endurance Track Team and to compete at World Championships and the Olympics one day.

Nina has proved that balancing studies with high performance cycling is possible. As a sighted pilot, the Bachelor of Management Studies student placed fifth in both the individual pursuit and the sprint at the Para-Cycling World Championships in Brazil last year, while maintaining top grades and being invited to join the Golden Key International Honour Society (top 15% of students). As she studies for her honours papers this year, Nina will travel with the New Zealand Paralympics team and she’s aiming for a gold medal at the Paralympics in 2020.

The University of Waikato Sir Edmund Hillary Scholarships were established in 2005. Each scholarship is worth up to $10,000 a year for full-time undergraduate enrolment. Recipients receive personalised academic support, access to leading sports coaches and arts tutors, and a tailored leadership and personal development programme. There are currently 99 Hillary Scholars at the University of Waikato.

It runs in the family is licensed under a Creative Commons Attribution 4.0 International License. 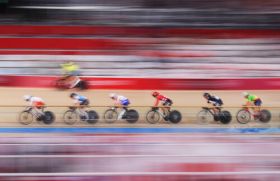