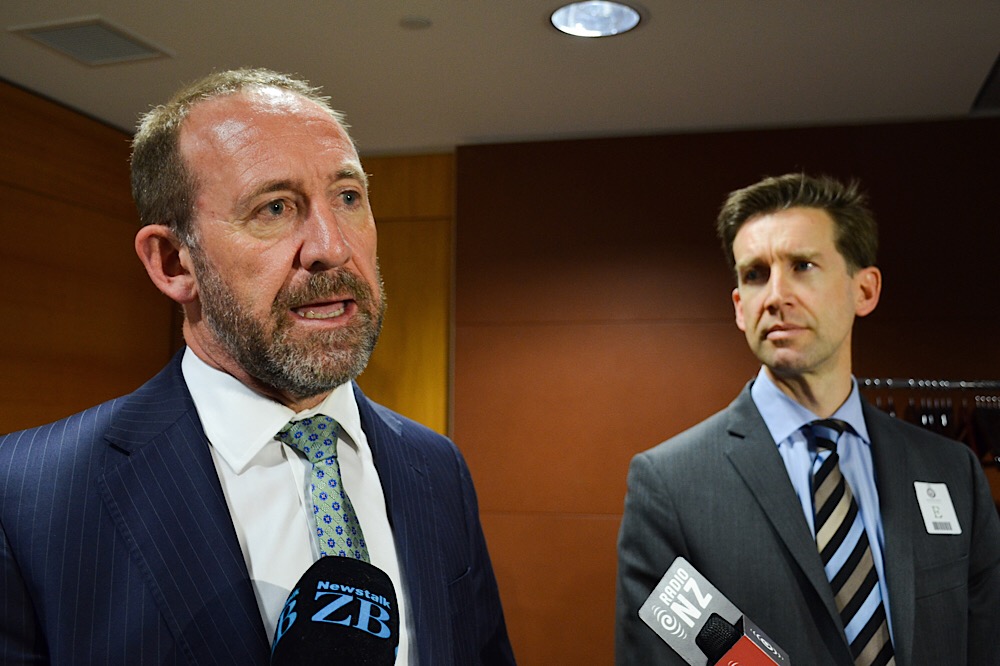 Justice minister Andrew Little (left) said that the “year and a day” rule can no longer be justified because of medical advances that keep people alive for longer.
AAP Image, CC BY-SA

This week, the New Zealand Parliament passed the Crimes Amendment Bill, abolishing the “year and a day” rule. This rule meant that no one could be liable for killing another person unless that person died within a year and a day of the act that caused their death.

This rule was one of the reasons why homicide charges were not laid against anyone for the deaths of 115 people in a building that collapsed in the 2011 Christchurch earthquake, even though a Royal Commission of Inquiry found the building did not meet code requirements. No one could be prosecuted for homicide because the earthquake occurred many years after the building was constructed - outside of “a year and a day”.

Doing away with the rule raises some interesting questions, both in relation to any proposed euthanasia laws and homicide more generally.


Operating and substantial cause of death

For someone to be guilty of homicide – whether it is murder or manslaughter – they must have some intention or fault and their act must be an “operating cause and a substantial cause” of death. This phrase comes from English case law and it essentially means that the original wound must be operating on the victim at the time of their death and be a substantial, if not the only, cause of death. This is not always easy to establish, especially when other events intervene.

Last year in England, Berlinah Wallace was charged with murdering her ex-partner, Mark van Dongen, after she threw sulphuric acid on him. What is unusual about this case is that Van Dongen did not die from the acid. His face and body were severely scarred, he was paralysed from the neck down, lost most of his vision and his lower left leg had to be amputated.

He spent more than a year in hospital and then went to Belgium where he successfully applied for euthanasia. Wallace was acquitted of murder, but she was found guilty of throwing a corrosive substance with intent, and was sentenced to life imprisonment, with a minimum term of 12 years.

In 1996, England and Wales abolished the year and a day rule so the fact that Van Dongen died more than a year after the acid attack did not prevent Wallace being charged. But a central issue in the case was whether her actions were the legal cause of death. The immediate cause of death was the actions of the doctors at the euthanasia clinic, but the jury had to decide whether the doctors’ actions made Wallace’s act of throwing acid legally inoperative as a cause of death.

The fact that she was acquitted of murder suggests the jury was not satisfied her actions were a substantial and operating cause of death, or that it was not reasonably foreseeable that Van Dongen might choose euthanasia as a result of his injuries.

Responsibility for our actions

While the year and a day rule is arbitrary, its repeal does raise some questions about the point at which we stop being responsible for the consequences of our actions. Justice minister Andrew Little said:

advances in medical science and life support machines that may keep victims alive for longer than a year and a day mean there is no longer any justification for this rule.

But from another perspective, this may be precisely why the rule is needed. While people do need to be accountable for harming others, especially if they intend to kill someone, other cases might require some reasonable limits.

Imagine a defendant whose negligent driving caused another person serious injuries, but because of “advances in medical science” the injured person lived for another ten years before finally succumbing to their injuries. Even if death was reasonably foreseeable at the time of the injury, a decade is a long time for a person to be uncertain of potential criminal liability, especially for homicide.

Euthanasia also raises some issues. In New Zealand, the Select Committee is due to report back on the End of Life Bill at the end of March. If we go ahead with some form of “assisted dying”, this could also extend the scope of liability beyond current limits.

Read more:
The fear that dare not speak its name: how language plays a role in the assisted dying debate

The law generally says that we take our victims as we find them – if they have a particular vulnerability (a weak heart, for example,) that doesn’t affect our liability for harming them. This may be fair enough when it comes to murder, but to what extent should a defendant’s liability for manslaughter depend upon a victim’s voluntary decision to end their own life, even if they do have a susceptibility toward, say, self-harm?

This is a difficult question and I don’t suggest reinstating the year and a day rule is an answer. But its repeal means we may have to rethink the traditional criminal law approach to causation in homicide cases.