A Biden presidency might be better for NZ, but the big foreign policy challenges won’t disappear with Trump 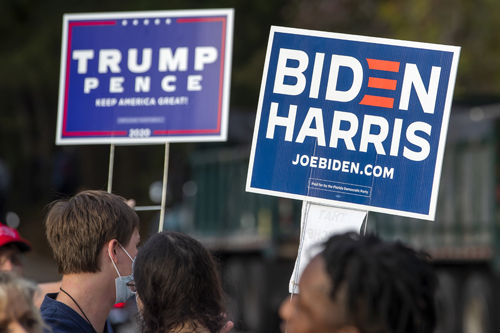 The presidency of Donald Trump has been challenging for New Zealand’s foreign policy. Our commitment to multilateral solutions to global problems has run into a new isolationism in the United States.

Infamously, Trump quit both the World Health Organisation and the 2015 Paris Agreement on climate change. During a global pandemic and with a looming environmental crisis, US leadership has been missing.

If Joe Biden is elected on November 3, however, some kind of realignment may be possible. New Zealand policymakers will be closely watching several key areas.

Trump’s exit from the Paris Agreement was significant for the abandonment of the US’s emissions target, but possibly more so for the loss of leadership and financial support needed to encourage sustainability in the developing world.

New Zealand has committed to net zero carbon emissions by 2050. This goal is shared by Biden, who would also recommit to the Paris Agreement and the WHO.

Biden has even signalled he may use trade agreements to combat global warming. This would be a major change to US trade policy and could have implications for agricultural countries such as New Zealand with methane-rich exports.

New Zealand is committed to free trade and a rules-based international order, but Trump seemed intent on wrecking the World Trade Organisation (WTO), especially after it ruled his ongoing spat with China over trade was wrongful.

Biden may show more restraint on the WTO, but neither he nor Trump is likely to advance a long-desired free trade agreement (FTA), despite the US being New Zealand’s third-largest trading partner.

Trump crushed the previous nearest thing to an FTA, the Trans Pacific Partnership Agreement (TPPA). But he did sign into law a new arrangement making it easier for Kiwi entrepreneurs to work in America.

Although Biden is unlikely to differ from Trump on some trade issues (such as with China), he may revisit the TPPA.

The divisions between Trump, Biden and the interests of New Zealand are much greater over arms control treaties. New Zealand’s nuclear-free commitments run counter to the global instability caused by recent US actions.

The so-called New START treaty, which controls the 90% of the world’s nuclear weapons held by the US and Russia, now hangs by a thread, with a possible one-year stay of execution beyond its planned expiration date at the beginning of 2021.

Trump also quit the 2015 Iran nuclear accord, despite the fact Iran was complying with its provisions. When the US assassinated Iranian general Qasem Soleimani in Iraq, Iran responded by firing missiles at American bases.

Trump opted to stop and not risk bloody regional conflict, but his reckless gamble put New Zealand soldiers stationed in the Middle East at high risk.

Biden would be less volatile. He wants to see if the nuclear deal can be revived. He is also more likely to try to save New START, despite misgivings about Russia.

Anything that prevents the international arms control architecture completely collapsing will benefit everyone. For New Zealand, it would mean the nuclear-free foreign policy was once more in step with global goals.

Trump has moved three Middle East nations towards normalising relations with Israel, ended American involvement in Syria and has tried to get out of the quagmire of Afghanistan.

He also obtained a promise of denuclearisation from North Korea, although this is an empty promise, more a pause than a sign of peace in an intergenerational problem. Biden may not do much better, but his approach to negotiation would probably differ, moving away from Trump’s personality-driven approach.

Biden would avoid a full exit from Afghanistan and Iraq, fearing the consequences of any resulting power vacuum. He also has a record of strong support for Israel, although he is probably more sympathetic to the Palestinian cause than Trump.

Overall, the military and strategic differences between the two White House candidates are not vast. Neither seriously undermines New Zealand’s own foreign policy settings. If there is tension it will probably be over China.

Neither Trump nor Biden is likely to improve US-China relations. If anything, Biden may by more hawkish and push harder for a multilateral approach to punishing China for everything from trade infractions to human rights abuses.

For New Zealand — which is slow to act against China, its biggest trading partner — some of the most difficult foreign policy challenges are yet to come, whoever is in the White House next.