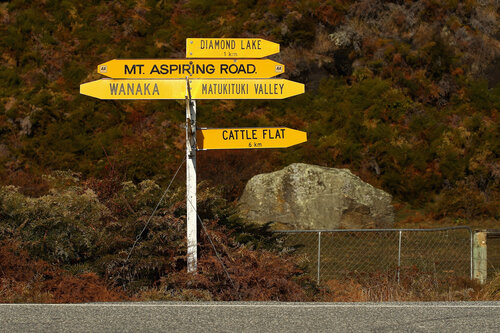 So the language of Aotearoa New Zealand’s road signs is important — not least because they are also expressions of the exercise of state power in our everyday lives.

The size, shape and text of road signs are all governed by law.

Despite te reo Māori’s status as an official language in New Zealand there is no legal requirement for signs to be in any language other than English. But that could soon change.

Aotearoa New Zealand could have bilingual signage by 2023, according to Transport Minister Michael Wood, who said he saw the need for change as a “priority”.

That would mean we catch up with what has been common practice overseas. Many countries already employ bilingual or even multilingual road signs that recognise their official language or languages.

For example, in Wales, bilingual signage is a legal requirement.

Irish is the first official language of Ireland (English being the second) and signs have been bilingual since Ireland became independent from Britain almost a century ago.

In Finland the signs are in Finnish and Swedish, the country’s official languages. Belgium has road signs that are in Dutch in Flanders and in French in Wallonia.

Switzerland has various mixes of French, German, Italian and Romansch on its road signs.

These examples are just a small sample of the willingness of many countries to adopt bilingual or multilingual road signage. They signal the presence of different linguistic groups. Monolingual signs do the opposite.

What’s in a name?

Moving towards bilingual signage in Aotearoa New Zealand will add impetus to the question of whether we should restore Māori place names.

Te reo Māori has been an official language here since 1987. The Te Ture mō Te Reo Māori/Māori Language Act 2016 reaffirmed that official status, and the language’s place as a taonga — a treasure — to be valued by the nation.

And yet the road signs are still in English only.

In 1998, the Treasury explored the question of whether the country’s road signs should be bilingual as part of an investigation into the revitalisation of te reo Māori.

The research then said bilingual signage would increase the visibility of te reo Māori and this would have a positive impact on the language.

This view echoes Belgian research that found road signs can convey an “important message about language status” and that “language visibility contributes to the legitimisation of languages, which in turn affects their perception”.

Curiously, given the central importance of language to any society and to its law, the legal protection given to language rights is not all that clear.

The International Covenant on Civil and Political Rights 1966 refers to minority rights, including the right to share a common language. The New Zealand Bill of Rights Act 1993 also protects these rights.

Aotearoa New Zealand has also approved the United Nations Declaration on the Rights of Indigenous Peoples 2007. As such, Māori have the right to designate and retain Māori place names.

There is often a strong correlation between discrimination and language, but under New Zealand law language is not included in the prohibited grounds of discrimination.

The Universal Declaration of Human Rights 1948, as well as the International Covenant on Civil and Political Rights, do prohibit discrimination on the grounds of language.

Aotearoa New Zealand has accepted the International Convention on the Elimination of All Forms of Racial Discrimination 1965 and is obliged to prohibit racial discrimination in the enjoyment of the right to freedom of expression.

This is an important point where language and race are connected: the right to freedom of expression is a legal right and includes “freedom to […] receive and impart information […] of all kinds […] in writing or in print”. Domestic law also protects this right.

While the right to free expression can be restricted, in Aotearoa New Zealand such restrictions must be reasonable and justifiable.

The benefits of bilingual signs

On that front, public safety has been raised as an issue in relation to bilingual road signs with regard to accurate translations and cluttered signage.

Research has dismissed any concern that bilingual road signs could confuse people and cause accidents.

Researchers in the UK discovered longer road signs did cause drivers to reduce their speed, but any associated risk reduced as drivers became more familiar with the signs.

Research in Scotland confirmed the finding that bilingual signs do increase demands on drivers, but they seem to be able to respond appropriately. There was no detectable change in accident rates.

Belgian research concluded multilingual signs were unlikely to have an impact on reading times and driving safety.

So there are plenty of reasons why our road signs should be bilingual. If we go back to basics, road signs do much more than tell us where we are, where we are going, and how to get there.

In a country such as Aotearoa New Zealand, they are a demonstration of our commitment to equality — of language and more generally. Bilingual road signs can serve a deeper purpose by helping us to arrive at a more inclusive and equal society.