The Aquaculture economy in the Bay of Plenty has just received a significant boost with the opening of a brand-new facility in Tauranga.

The 1000sqm facility was officially opened by Senior Deputy Vice-Chancellor Professor Alister Jones and is the first in New Zealand to provide state-of-the art infrastructure for seaweed cultivation from nursery stages to grow-out and aims to deliver closed life-cycle aquaculture production of seaweed.

“The facility and algae produced here will form the basis of cutting-edge and interdisciplinary research. It is about a sustainable diversification of New Zealand’s aquaculture industry and it provides a strong foundation point for the blue economy,” said Professor Jones.

A lucrative industry for the Bay of Plenty

Dr Magnusson says Tauranga’s harbour is subject to recurring blooms of green seaweed (sea lettuce) and while the blooms are deemed a pest, this species of seaweed may hold the key to a lucrative industry in the Bay of Plenty.

“We’re researching commercial applications of seaweed and potential ways to use macroalgae and their extracts for agricultural, human and animal health, and materials science applications,” she says.

“Aquaculture has a proud history in this part of New Zealand and this new impressive facility can help us take full advantage of future opportunities in this growing and high-value industry.”

Seaweed is a huge multi-billion dollar industry in Asia - particularly red and brown seaweed, but the potential of green seaweed is yet to be fully explored and maximised.

“Sea lettuce has been our primary focus due to its abundance in our region, its amenability to cultivation and its fascinating bioactive properties. Previous research in Australia has shown a similar species had cardiovascular and weight management benefits in obese rats,” says Dr Magnusson, who previously headed the Centre for Macroalgal Resources and Biotechnology at James Cook University, Australia.

The opening of the new facility is thanks to a $13 million algal biotechnology research project, funded by the Tertiary Education Commission’s Entrepreneurial Universities programme and the University of Waikato.

From sea pest to salad, and more

“Sea lettuce has a range of applications from watering your garden with seaweed extract, to eating it, to promoting general health and wellbeing both in humans and a range of animal production systems.”

While the gelling properties in the soluble fibre extracted from sea lettuce can be used for health and nutraceutical products, Dr Magnusson and her team are also extracting salt, soluble fibre and protein from the residual biomass for use in different applications.

Dr Christopher Glasson says the new facility in Tauranga will assist the team’s research into the bioactive properties of sea lettuce (Ulva).

“A range of other products derived from sea lettuce, including biochar and nanocellulose composites, can be used to contribute to net carbon sequestration, reducing New Zealand’s carbon footprint.”

As well as salt water tanks housing the sea lettuce, the new aquaculture facility also has a number of fresh water tanks to address another main aspect of Dr Magnusson’s research programme.

“The freshwater algae in our facility have very good nutrient extraction and bioremediation properties which could assist in cleaning up our natural waterways,” she says. “Unfortunately our freshwater streams, rivers and lakes often have high levels of nitrogen. We can help to remove those excess nutrients by growing algae in the nutrient rich water of various discharge streams, as the algae takes up nitrogen and phosphorus to incorporate into its tissue for growth; when you harvest the biomass, you recover those nutrients from the system and at the same time produce a biomass resource for the development of value-added products.”

But the research does not stop at land-based aquaculture. “We’re developing and optimising controlled reproduction and seeding techniques for the large-scale production of seaweeds in open sea aquaculture systems, along with the optimisation of established production methods for land-based cultivation of green seaweeds and freshwater macroalgae for New Zealand species and environmental conditions,” says Dr Magnusson.

Originally from Sweden, Dr Magnusson says working with seaweed wasn’t something she set out to do, but she finds it extremely rewarding. “My objective is to develop bioproducts that will support a sustainable seaweed aquaculture industry in New Zealand – there is huge potential for this market thanks to our temperate climate,” she says. “I’m excited about the organic growth of opportunities for community outreach – from local high school science students to connections with local iwi.”

Dr Magnusson says the new facility is critical to the success of the team’s research as they look for solutions that will help reduce cattle methane emissions and fight agricultural and horticultural diseases in an environmentally sustainable way.

“We hope that in another two years we will have ocean farms growing seaweed as commercial crops as well as land based bioremediation facilities growing macroalgae to mop up excess nutrients and producing an algal crop for different applications, and hopefully some local ‘aquacultured’ seaweed products on the shelves,” she says.

As part of the Tertiary Education Commission’s Entrepreneurial Universities programme, the Government has committed $4.1 million over four years to the seaweed research, while the University of Waikato is putting in more than $9 million.

Aquaculture economy a lucrative industry for the Bay of Plenty is licensed under a Creative Commons Attribution 4.0 International License. 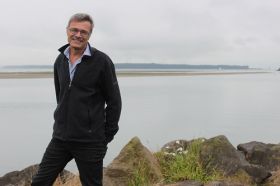