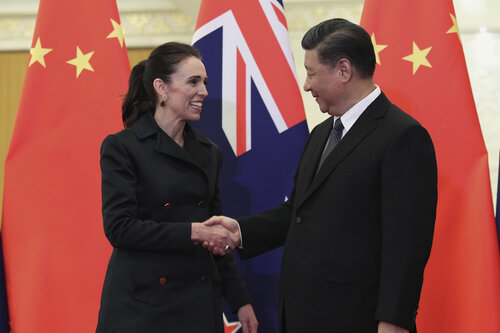 With tension escalating between China and members of the Five Eyes security alliance, most recently over a Chinese tweet that used a doctored image to attack Australia, New Zealand is arguably in a prime position to broker a kind of truce.

Someone needs to take the initiative. Right now, things are deteriorating, as the
trade stand-off with Australia demonstrates.

With China having already reacted to Five Eyes criticism of its Hong Kong policies by threatening that “their eyes will be plucked out”, the situation is combustible: a large, tinder-dry pile of disputes, with both sides flicking matches of angry rhetoric at each other.

On one side we have the Five Eyes allies — America, Britain, Canada, Australia and New Zealand. In the minds of many in the West, this is a family of nations in which peoples, culture and values are tightly interwoven.

On the other side is China, with which New Zealand has had an official relationship since the turn of the 20th century. While the two countries fought on the same side in the second world war, once China became communist their paths diverged. They were on opposite sides in the Korean and Vietnam wars.

New Zealand in the middle

When it comes to its security interests, New Zealand is potentially more attractive to China than the other Five Eyes nations — particularly for its independent foreign policy (including becoming nuclear-free in the 1980s) and the absence of any specific disputes between the two nations.

This balanced position offers New Zealand a unique opportunity to become the catalyst for positive change. To do so will require a short-term feel-good factor and some longer-term goals — starting with a couple of invitations.

Prime Minister Jacinda Ardern has already issued an invitation to President-elect Joe Biden to visit New Zealand. She should now do the same for the paramount leader of China, Xi Jinping.

Such invitations in the past have been about building confidence and trust — often by focusing on something valuable and symbolic nations already share in common. Historically, for instance, Richard Nixon and Leonid Brezhnev bridged the divide in 1973 by committing to joint conservation initiatives.

A bird in the hand?

Taking that example, then, what better symbol for New Zealand, the US and China than the bar-tailed godwit, or kuaka? The bird holds the world record for migration, flying between parts of North America, China, Australia and its furthermost destination, New Zealand (depending on its subspecies).

New Zealand could host an international gathering to discuss a dedicated flyway agreement, with rigorous conservation goals, in which all countries jointly strive to protect the birds and their habitats.

Read more:
A Biden presidency might be better for NZ, but the big foreign policy challenges won't disappear with Trump

Of course, the real purpose of such a meeting would be to create an environment where the US and China could talk about the key issues that threaten everyone. For precedent, recall Ronald Reagan and Mikhail Gorbachev at Geneva in 1985, when the two leaders met in a neutral location and took the first steps towards building a working relationship that ultimately led to the end of the Cold War.

For such a plan to work, all sides will need a secure venue to communicate directly, without publicly inflaming matters in the international media. To start the ball rolling, New Zealand should offer to host this ground-breaking, face-to-face gathering as the ideally placed mediator.

Although there are many things for China and the Five Eyes partners to resolve, the immediate priority must be to secure peace and reduce tensions. The precedent here is what George Bush senior and Boris Yeltsin finally did in 1992, building on the positive achievements their predecessors had created.

Then, when the trust was solid and the time was right, nuclear control and disarmament treaties were concluded, making the world safer.

Read more:
What Australia can learn from New Zealand: a new perspective on that tricky trans-Tasman relationship

New Zealand’s objective should be nothing less than trying to copy the precedents that ended the first Cold War with the Soviet Union. The objective would be a series of interlinked, equitable agreements.

These would cover nuclear arms control (especially at the regional level, with a starting focus on particular platforms such as intermediate-range nuclear missiles); limits on the amount, build-up and location of conventional weapons; and confidence-building measures (such as open skies verification agreements).

It would also be necessary to create new rules for military training exercises, mutual observers, and strict protocols to avoid accidental clashes.

None of this is easy or quick, but it is better than standing by while the situation worsens. Rather than be passive hostages to fortune, New Zealand should act. Invite Biden, invite Xi, look at the godwits — and start talking long-term peace, security and stability.