As the Taliban’s grip on Afghanistan tightens, New Zealand must commit to taking more refugees 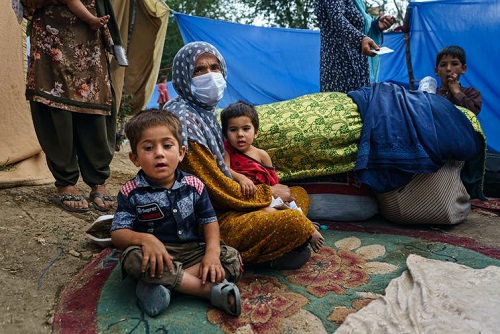 A family taking refuge in a makeshift camp for displaced people near Kabul. GettyImages

With a Defence Force Hercules now en route to Afghanistan to assist with rescue and evacuation, New Zealand joins a 60-country response to the unfolding calamity. Yet doubt still surrounds just who is eligible for the mercy mission.

We know the thin lifeline via Kabul airport extends first to those with foreign nationality — 53 people in New Zealand’s case. All states have obligations to protect their own citizens, so this is entirely right.

The second eligible group are those Afghan citizens who were associated with the foreign militaries that fought the Taliban and are now at risk.  So far, this includes 37 Afghans who worked for the New Zealand Defence Force or other agencies and up to 200 members of their immediate families.

This is an ethical rather than legal obligation, but it is New Zealand’s responsibility to help those who once helped this country’s efforts during the war and occupation.

But there is a third group about which the New Zealand government has been silent — refugees. Afghanistan is yet again about to see a surge in people fleeing persecution, adding to the 2.6 million already displaced before the Taliban returned.

This dire situation has existed for over 40 years and is now likely to get much worse. At least 400,000 people have been displaced since the beginning of the year, and retribution by the Taliban has not even begun.

Other countries are stepping up

What should New Zealand do, then? While these people aren’t eligible for a New Zealand passport and didn’t work for our military, they are at risk largely because of their support for the  Western presence in Afghanistan that New Zealand was part of.

The list of who could be considered traitors or face persecution by the Taliban is long. They include religious and ethnic minorities, dissidents, women, journalists, human rights workers and those previously in positions of power.

Read more:
Owning up: Australia must admit its involvement in Afghanistan has been an abject failure

At this stage, Britain is planning to take 20,000 refugees over several years, prioritising women, girls and religious and other minorities. Canada also intends to resettle 20,000, focusing on women leaders, human rights workers and reporters.

The United States has not yet set a figure, but a number of individual states have opened their arms. Australia, too, has pledged to take an initial 3,000, with this number expected to grow.

So far, New Zealand has said nothing. And despite the annual refugee quota recently increasing from 1,000 to 1,500, New Zealand still has one of the lowest per-capita refugee intakes in the world.

But there are precedents when it comes to emergencies such as the one in Afghanistan. The annual refugee quota might have been introduced in 1987 by the fourth Labour government of David Lange, but it had been his National Party predecessor, Robert Muldoon, who advanced refugee policy after the war in Vietnam.

Read more:
The Taliban wants the world's trust. To achieve this, it will need to make some difficult choices

Then, too, New Zealand had been involved in a military conflict that ended in defeat and created a refugee crisis.  New Zealand ramped up its effort in 1977 as the “boat people” fled the new Vietnamese regime.

New Zealand initially accepted 412 Vietnamese refugees, with the intake rising between 1979 and 1980 when about 1,500 arrived.

The same should happen again. New Zealand should work with its allies, focus on the priority groups that most need sanctuary, move them to safety temporarily and bring them to the country when the time is right.

The opening target should be a one-off intake of 1,500 additional refugees on top of the existing quota.

Save as many as possible

The war in Afghanistan is lost. Despite 20 years’ effort, over US$2 trillion spent and at least 170,000 deaths, the Taliban have won.

It cost ten New Zealand lives and the country spent at least NZ$300 million on its contribution to the occupation.

The last time the Taliban took control in the mid 1990s there was a human rights disaster.  This time may be worse. Having achieved outright victory, they are not planning anything resembling democratic government. Their statements about respecting human rights have been vague and unconvincing.

Not everyone can be saved from what is a foreseeable disaster. But, having been a part of a failed mission in Afghanistan, New Zealand now has an obligation to do what it can to save as many as is reasonably possible.