COVID disinformation and extremism are on the rise in New Zealand. What are the risks of it turning violent? 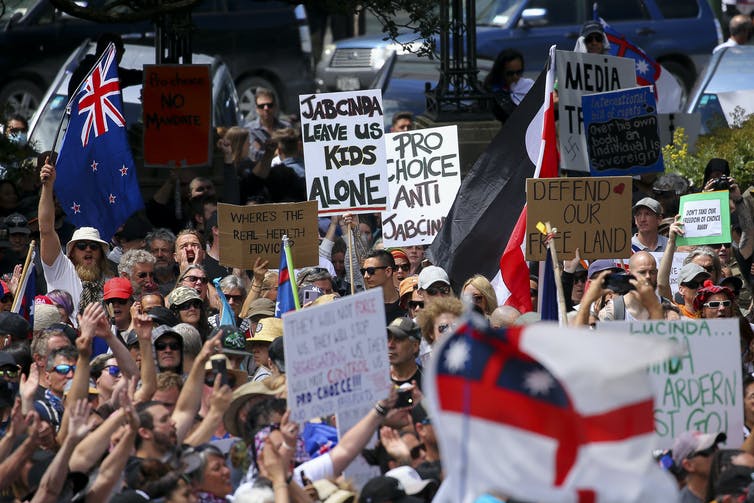 Last week’s COVID protest outside parliament served as a warning that New Zealand is not immune to the kinds of anger seen overseas. As Labour Party whip Kieran McAnulty put it, “I think everyone needs to be aware that things are starting to escalate.”

McAnulty himself had been abused by some with strong anti-vaccination views, and there has been increasingly violent rhetoric directed at government politicians and Prime Minister Jacinda Ardern. As a result, security for MPs has been stepped up.

As the recent report from research centre Te Pūnaha Matatini showed, there has been a sharp increase in the “popularity and intensity of COVID-19 specific disinformation and other forms of ‘dangerous speech’ and disinformation, related to far-right ideologies”.

The analysis noted a broader threat: “that COVID-19 and vaccination are being used as a kind of Trojan Horse for norm-setting and norm-entrenchment of far-right ideologies in Aotearoa New Zealand.”

The country is not alone in this, of course. COVID-19 has seen dissent and angry protest rise globally, with inevitable concern over an increased risk of terrorism or violent extremism.

By contrast, Australia’s threat level is set at “probable” and Britain’s at “severe”. According to its Department of Homeland Security, the US “continues to face a diverse and challenging threat environment as it approaches several religious holidays and associated mass gatherings”.

An SIS terrorism threat assessment from February this year, coupled with a “” from the Combined Threat Assessment Group in November 2020, divided potential terrorists in New Zealand into three groups based on faith, identity and politics. What they share is a willingness to use violence to achieve their goals.

The most likely scenario involves a lone actor, inspired by any ideology and probably using an unsophisticated means of attack, without any intelligence warning. However, a small anti-government cell was also considered a realistic possibility.

The SIS assessment noted there are almost certainly individuals who advocate the use of violence to promote racial or ethnic identity beliefs, as well as individuals potentially prone to faith-based violent extremism. As for politically motivated actors, the SIS was more reassuring:

While some individuals and groups have lawfully advocated for signicant change to current political and social systems, there continues to be little indication of any serious intent to engage in violence to acheive that change.

The February report is heavily redacted, so needs to be placed next to the November “Threat Insight”. That report noted a “realistic possibility” of terrorist acts depending on how COVID-19 and the associated economic and social impacts unfolded, and how individual extremists might be affected. It concluded:

The situation in New Zealand over the next 12 months is likely to remain dynamic. There is a realistic possibility further restrictions or potential vaccination programmes […] could be triggers for New Zealand-based violent extremists to conduct an act of terrorist violence.

If there is any comfort to take, it might be that New Zealand has risen in the 2021 Global Peace Index, putting the country second only to Iceland.

This represents a return to relative normality after the 2019 Christchurch terror attack saw New Zealand drop 79 places in the Global Terrorism Index in 2020 (ranking 42nd, just behind Russia, Israel and South Africa).

But while there are other reasons to be hopeful – notably New Zealand’s comparatively low and apparently reducing homicide numbers – there remain reasons for concern. From the Lynn Mall terror attack through to the murder of a police officer or the tragic shooting of an innocent teenager, serious violence is not uncommon.

There has also been an increase in firearms injuries, many (but not all) gang-related. Figures released under the Official Information Act show the police are facing increased risks: between March 2019 and July 2021, officers had firearms pointed or discharged at them 46 times.

New Zealanders can have some faith the system, however. Two potential shooting events, one involving a school, were foiled by police. The New Lynn extremist was already subject to monitoring so tight he was shot within 60 seconds of launching his attack.

Security intelligence also detected espionage in the military, and was instrumental in New Zealand Cricket calling off its tour of Pakistan due to a plausible terror threat.

A ‘see something, say something’ culture

All of this underscores the need for everyone to do what they can to combat alienation and misinformation in the community, anchored by tolerance, respect and civil behaviour. And it also requires that people be prepared to report acts of suspicious activity or threats of violence (online or not).

As the Royal Commission on the Christchurch terror attacks noted, the likeliest thing to have prevented the tragedy would have been a “see something, say something” culture — one where people could safely raise their concerns with the appropriate authorities.

“Such reporting,” the commission concluded, “would have provided the best chance of disrupting the terrorist attack.”

As the pandemic stretches into the next year, with likely ongoing restrictions and unforeseeable complications, this remarkable sentence is worth remembering. It suggests the best defence against extremism is to be found within ourselves, and in the robust and safe communities we must create.