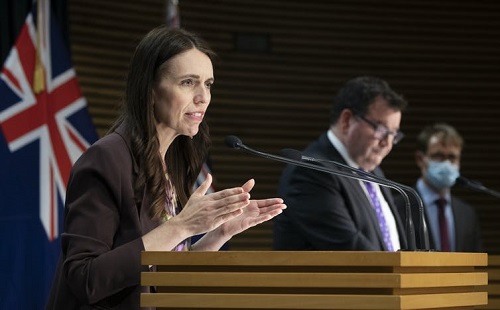 The National Party’s recent call for a royal commission of inquiry into New Zealand’s pandemic response may have been part of a wider political strategy, with former leader Judith Collins highly critical of the government’s handling of the Delta outbreak.

But the idea predated its recent advocate, and there are good, non-political reasons for holding such an inquiry – not least that it would be powerful and independent. Royal commissions reach further and dig deeper than parliamentary select committees, and are free from partisan sway.

Nor is this a novel recommendation. In 1919, the Influenza Epidemic Commission investigated what happened after the arrival of the disease in New Zealand the previous year. That commission’s influence can still be felt today.

The 1918-19 pandemic killed at least 8,831 people (still probably an underestimate), with Māori making up almost a quarter of the total, the single worst human disaster recorded in New Zealand history.

Parts of the 1919 commission report read like they were written today. The virtues of masks, quarantine, ventilation, the importance of Māori settlements, and basic health education are all canvassed.

Other parts are simply curious, such as the discussion of whether alcohol helped, with some medical witnesses testifying two or three whiskeys and soda a day were the best medicine. But there are also surprisingly accurate predictions of what inoculation might look like in the future.

Mostly, however, the commission was concerned with questions of how the pandemic made it into the country, how local health systems had collapsed, and what could be done to prevent history repeating.

Its answers provided the foundations for the 1920 Health Act, which provided the basis for the current law, on which much of the contemporary legal and policy responses to COVID-19 have rested.

A royal commission, then, is the appropriate forum for assessing New Zealand’s COVID response and making recommendations that will stick. It’s the highest form of official inquiry into matters of public importance, more powerful than a government inquiry.

Such commissions have been used extensively throughout the 20th and 21st centuries, including after the Christchurch terror attack, the Canterbury earthquakes and the Pike River mine disaster. Right now there is a royal commission investigating the historical abuse of children in state care.

There can be no doubt New Zealand’s handling of the pandemic justifies the same attention. It has overshadowed everything in the past two years, and no New Zealander has been untouched by it in some way.

But such a commission would certainly differ greatly from the 1919 influenza inquiry, if only because of the scale and duration of COVID-19 and the relative success of government policy in combating it.

With 44 deaths recorded so far, the government’s first duty to keep its population safe appears to have been met, at least when compared to the horrors experienced in other countries, and indeed during the 1918-19 pandemic.

However, that success has come at a cost – to mental health, the economy, rights and freedoms and, to a degree, social cohesion. All of these will be important elements of an inquiry.

While most people suffered in some way, the burden has not been equally shared. In particular, the impact on Māori – currently the subject of a Waitangi Tribunal hearing – will be a focus of inquiry.

Similarly, a royal commission will need to look at how women, children, people with disabilities, the elderly, and anyone affected by international border closures or access to vaccines and health care have fared.

Of course, how the economy weathered the pandemic will form a significant part of an inquiry: how much was spent and where, who benefited or lost, and what will be the long term consequences?

Lessons for the future

Finally, the entire legal framework surrounding the government’s response needs the scrutiny only a royal commission could provide.

In the past two years, the country’s legal system has creaked and groaned in response to the myriad decisions that affected the lives of ordinary New Zealanders in unprecedented ways.

Critical pieces of legislation curtailing personal rights and freedoms were rushed urgently through parliament, arguably weakening existing democratic safeguards. Where these decisions have been legally challenged (unsuccessfully so far), the courts have been left to find the delicate balance between individual and collective rights.

A royal commission would allow for these personal, economic and democratic costs to be fully documented, measured and evaluated. Most importantly, it can recommend improvements and remedies. And it should be scheduled to start on March 19, 2022 – two years exactly from when New Zealand first closed its borders to the outside world.

Present generations have learned some hard but valuable lessons from COVID-19. Given the possibility of future pandemics, it’s vital those lessons are passed on to future generations.