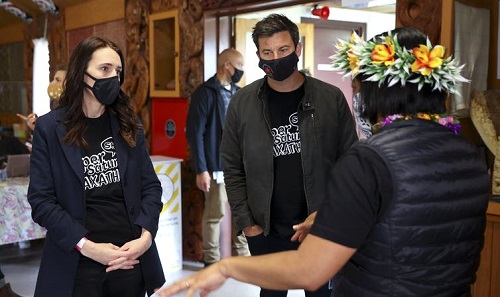 Super Saturday and a televised “vaxathon” were part of the government’s push towards a 90% vaccination goal. About 85% of New Zealanders have now had their first dose, and 65% of the population are fully vaccinated.

But only 65% of the Māori population have had their first dose. By ethnicity, Māori had the highest proportion of first doses on Super Saturday, with 50% of all Māori vaccinations being the first dose.

The mass vaccination showed that improved access through pop-up and walk-in clinics, community events and free transportation can make a big difference in uptake. But it also highlighted ongoing gaps and structural inequities in New Zealand’s vaccine rollout.

Ardern is expected to announce a new system this week to replace the current COVID-19 alert levels and to ease restrictions gradually, once higher vaccination rates are achieved across the population.

Tairāwhiti had the lowest Super Saturday turnout, and the region also has some of the worst access to vaccination services. The East Cape is served by just two permanent facilities and, as of October 19, there were no appointments available within the next week.

Out of concern that public health protections could be removed before people in the region had a chance to get vaccinated, members of the Te Aroha Kanarahi Trust decided to take matters into their own hands and crowd-fund for a mobile vaccination clinic.

Issues of access and availability are similar for rural towns and regions across Aotearoa New Zealand.

As commentator Morgan Godfery points out, the high levels of government distrust and socioeconomic constraint exacerbate issues of inequitable access.

Recently, the Ministry of Health released suburb-level COVID-19 vaccination rates for the first time. There was an inevitable rush to see which towns were doing the best, and who was lagging behind.

Murupara was identified as the nation’s “slowest town”. However, this title is unhelpful, and misses a lot of important contextual information.

One reason Murupara’s vaccination rates are low is that the town has one of the lowest levels of access to vaccination services in Aotearoa. The nearest permanent vaccination site is more than a 50-minute drive away.

Another reason is that most residents haven’t even been eligible for the vaccine until early September. The median age of Murupara in 2018 was 29 years, placing most people firmly at the tail end of Group 4 of the vaccination rollout.

On the other hand, suburbs in central Auckland, Wellington and Queenstown – “leading the way” with high first-dose vaccination rates – tend to have good access to vaccination services. Of the top 30 “most-vaxed” suburbs, the longest drive time to a vaccination centre was just five minutes.

Associating neighbourhood ethnic composition with vaccination uptake also masks key contextual information and risks creating a racist pile-on. It hides the structural inequities within Aotearoa’s health system, and the vaccination rollout specifically, by placing the blame for low vaccination on individuals and communities.

Neighbourhoods with a high proportion of Māori residents have younger populations, worse access to health services, more experiences of racism within the health system, higher levels of poverty, and worse access to COVID-19 vaccination services.

Findings from international research suggest we need geographic and ethnic targeting of vaccination programmes to address inequitable outcomes, including a higher risk of death. Te Rōpū Whakakaupapa Urutā have been calling for this approach in Aotearoa.

We have long known that Māori, Pasifika and poorer populations are at the highest risk of COVID-19 infection and death, and are likely to have the worst access to vaccination services.

The age-based sequencing of the vaccination rollout was rational and important for prioritising older people who are at a higher risk of COVID-19 infection, hospitalisation and death. But rational policies can result in discriminatory outcomes.

Read more:
Research shows Māori are more likely to die from COVID-19 than other New Zealanders

Māori and Pasifika have much younger age structures, with median ages of 25.6 and 23.7 respectively, compared to 41.2 for European New Zealanders. During the Delta outbreak, this means a large proportion of Māori and Pasifika people remain unvaccinated and at risk.

In fact, more than 25% of both Māori and Pasifika communities can’t be vaccinated because they are children under the age of 12.

Vaccination rates need to be very high, across the country, for all communities, before we open up. As the pressure mounts on communities to adopt the “individual armour of vaccination” before protective public health measures are removed, we need to shift resources and control over vaccination programmes to local solutions.

Māori and Pasifika community organisations and leaders need the resources, support and data required to enable them to reach and vaccinate their people.