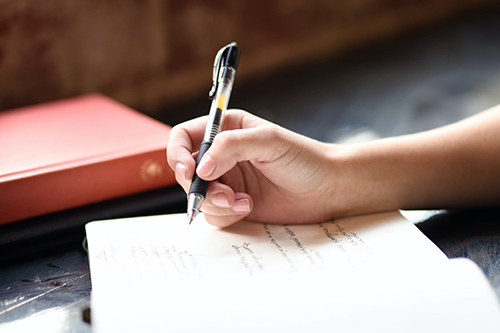 Home to some of New Zealand’s best novelists, short story writers and children’s authors, the University of Waikato is ranked among the top 250 universities globally in English Language and Literature in the QS World University Rankings.

Catherine Chidgey and Dr Tracey Slaughter teach on the programme and have a slew of publications and writing awards between them, continuing to pen new works as they nurture the next generation of writers and creative talent.

Chidgey instigated New Zealand’s most lucrative short story competitions in 2019 - the Sargeson Prize, named for acclaimed New Zealand writer Frank Sargeson and sponsored by the University. It has an Open and Secondary Schools category, designed to encourage emerging writers.

Chidgey is a multiple award-winner whose novels, including In a Fishbone Church, Golden Deeds and The Wish Child, have achieved international success. Her latest novel Remote Sympathy, was released last year to critical acclaim and her short fiction is widely published in anthologies and journals.

Her accolades include the BNZ Katherine Mansfield Short Story Award, the Prize in Modern Letters, the Commonwealth Writers’ Prize for Best First Book (Asia-Pacific), the Janet Frame Fiction Prize, the Katherine Mansfield Fellowship (France), the Rathcoola Residency (Ireland), the Acorn Foundation Fiction Prize and the Betty Trask Award (UK). Her novels have been Books of the Year in the LA Times Review of Books and the New York Times Book Review.

Dr Slaughter is best known for her award-winning short stories and poetry. Her writing has been acclaimed as “note-perfect” (The Spinoff) and “intoxicating … self-assured, forceful” (NZ Listener). She has been widely anthologised and her numerous awards include the Fish Short Story Prize (2020), international Bridport Prize (2014), and the BNZ Katherine Mansfield Awards in 2004 and 2001.

She is editor of Poetry New Zealand, Aotearoa’s longest-running poetry journal, funded by the University of Waikato. Dr Slaughter also established the literary journal Mayhem at the University, which features poetry, fiction and creative non-fiction from around New Zealand – a place for new and established literary voices to explore and establish their talent.The writing programme at Waikato has evolved over the years, preparing students for a wide range of careers in writing and communications.

The Master of Professional Writing (MPW) is the only degree of its kind in New Zealand, and offers a research-led and strongly practice-based qualification in professional and creative writing. Students can take on a writing internship, and are given mentoring. Top students may be selected for the Creative Writing Thesis which supports them to complete a book-length manuscript of publishable standard.

Associate Professor Sarah Shieff is another asset to the University’s writing programme. Sarah's main teaching and research areas are New Zealand literature and cultural history, food writing, the literature of trauma and gothic fiction. She is the convenor of the University's Writing Studies programme and edited Journal of New Zealand Literature, 2005-15, Letters of Denis Glover and Letters of Frank Sargeson.

Associate Professor Nicola Daly is an expert in children’s literature and a judge for the New Zealand Book Awards for Children and Young Adults. Her recent online course, the Power of Picture Books, saw people from 52 countries sign up for a four-week course which she taught with Waikato University digital learning specialist Dr Dianne Forbes.

Associate Professor Daly was a Fulbright New Zealand Scholar at the University of Arizona World of Words Center and believes that children’s literature can build bridges across global cultures.

Nurturing the next generation of writers is licensed under a Creative Commons Attribution 4.0 International License.