Protesting during a pandemic: New Zealand’s balancing act between a long tradition of protests and COVID rules 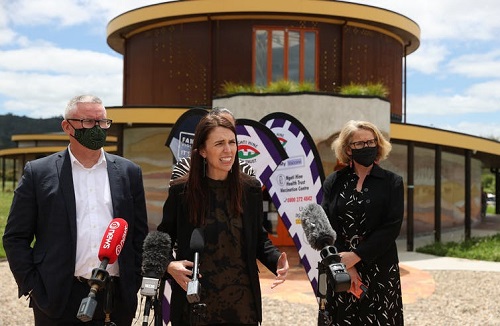 Over the past few weeks, thousands have gathered, in breach of COVID restrictions and public health measures, to protest against lockdowns and vaccination mandates. The PM has described such protests as “obviously illegal” and “morally wrong”.

As Delta infections rise and several professions now face mandatory vaccination as part of the drive to get to 90% vaccination rates, protests will likely expand.

But so will penalties for intentional breaches of COVID orders as amendments come into effect this month. A person who intentionally fails to comply with restrictions could face fines of up to NZ$12,000 (up from $4,000) or six months in prison. The maximum fine for failing to wear a mask where it is mandatory rises to $4,000 (from $300).

The importance of protests

Protesting is part of Aotearoa’s identity. New Zealanders have protested against poverty, war, nuclear weapons, gender inequality and the loss of Māori land and customary rights. Several protests — including those against the 1981 Springbok tour — have divided the nation.

Although there is no specific right to protest in law, protesting is a manifestation of rights to freedom of movement, association and peaceful assembly. Globally, these rights are protected by the Universal Declaration of Human Rights 1948 and the ensuing framework of human rights treaties. In Aotearoa New Zealand, the New Zealand Bill of Rights Act 1990 guarantees these rights.

But despite the legal underpinnings of the right to protest, specific protest actions must be in accordance with the law. They must not be unduly disorderly, violent or unsafe.

No right to disorderly protest

The restrictions on the right to protest can be seen in the criminalisation of certain conduct. For example, if someone behaves offensively in a public place, they could face a $1,000 fine. Indecent or obscene words can cost up to $500.

The fine could go to $2,000 and three months in prison if the behaviour becomes disorderly by acting or encouraging others to behave in a riotous,  threatening or violent manner.

Threatening a police officer, or committing an actual assault, could result in a $6,000 fine or six months in prison. Common assault on other citizens carries the same penalty. Causing wilful damage to property could cost a protester up to $2,000, the same as graffiti. Obstructing a public road without the correct authority can result in a $1,000 fine.

Even excessive noise or burning the national flag, if done in a particularly offensive way intended to dishonour it, could have repercussions for the protester.

COVID rules also currently restrict the right to peaceful assembly. These restrictions have been justified by the need to protect public health, which is recognised in international law. However, any such restrictive measures must be specifically aimed at preventing disease.

While New Zealand’s alert level 4 was very strict, alert level 3 is a little more liberal. Currently, Aucklanders are still expected to stay home, with exceptions for those who can’t work from home. Most events can’t proceed, except for ten-person gatherings at weddings, civil unions, funerals and tangihanga.

From next week, when restrictions are expected to ease further, Aucklanders will enjoy the freedom of larger outdoor gatherings of up to 25 people. Some shops will also reopen.

The question now is how authorities should respond to growing protests, some of which may involve illegal activity, in terms of breaching the above orders. The guiding principles for the police are that they must act to ensure public support and confidence, remain independent and impartial and act professionally, ethically and with integrity.

Read more:
Public protest or selfish ratbaggery? Why free speech doesn't give you the right to endanger other people's health

The importance of restraint

With any intervention to uphold the law, the police must consider keeping the peace and maintaining public safety as well as reassuring the community.

In Australia, some COVID protests have gotten out of hand and police responded with rubber bullets, tear gas and pepper spray. With very few exceptions, this approach is absolutely wrong. The guiding principle must be maximum restraint in the use of force when confronting  protests.

The emphasis must be on de-escalation of tense and volatile situations. The decision to intervene should only be taken at the highest level of the police force, when there is no other means to protect the public order from an imminent risk of violence.

This is not to say those who break the laws should not be brought to justice. They should — but after the event, not during it. Although rules may be broken, non-aggressive crowds of protesters should not be unnecessarily dispersed.

The current tactic of identifying those who break the rules and bringing them to justice later for their illegal activity is correct and appropriate for a country that values the importance of protests, as well as law and order.