She’d cared for members of her own family with physical and mental health issues, and when she left school at 16 she studied computing and business administration before finding work in facilities that treated people who had alcohol or other drug (AOD) addictions.

By the time she was 19, Melody was a mum, and by the time she was 25 she had three children and one on the way. She knew she wanted to make a difference in people’s lives and decided she needed to get some formal qualifications.

Living in Auckland, she studied for NCEA and higher NZQA levels, took on jobs in mental health, community and youth support, but she felt she needed more.

So, at 30 years old and living in Papakura, Melody enrolled at the University of Waikato in 2016 to study for a Bachelor of Māori and Pacific Development, helped with educational grants from Waikato-Tainui.

“I’d always lived in Auckland but I whakapapa to Waikato,” Melody says.

“Signing up to Waikato University felt right …something led me that way. I felt so comfortable there. The support was there. I loved it from the start. It was like coming home.” And for the first time in her life Melody was doing something for herself.

Her first year was full on; four children, full-time study and a big drive to campus nearly every day. She says the days were long, but three hours in the car each day gave her plenty of time for thinking and reflection.

But that pull to live in the Waikato stayed strong, so the family moved south, to Hamilton, closer to university, closer to what Melody felt was her true home. She also decided to cut down her papers from eight a year to six. And just as well, because while the move was taking place she received a call from Oranga Tamariki asking if the family would whangai (adopt within the family) her brother’s grandchild. Of course they would.

Now, as mother to five children, one a newborn, life was busier than ever.

“But there was no chance of going MIA [missing in action] because support people at the University would contact me, ask me how I was doing and made sure I was staying on track.”

Melody has one paper to go to complete her degree but is working full time, exactly where she wants to be, at Youth INtact, part of the drug rehabilitation organisation Odyssey. INtact works across the Waikato supporting rangatahi to find a way through “some of the tough stuff”.

She says her university study meant she felt equipped to apply for a job as cultural adviser, a newly created position for INtact.

“It meant I started with a blank canvas. I’m bringing a Māori cultural perspective to Odyssey principles. I’m practicing what I did at university. I must plan and lead workshops, and Waikato University taught me how to do that. I realise I have skills different from other people I work with. We did so much in-depth at uni, and covered topics I didn’t even know existed when I was at school, like anthropology and philosophy.”

The University of Waikato boasts some of the top Māori academics in Aotearoa New Zealand and Melody says she was fortunate to have them as lecturers.

“The knowledge and stories from my lecturers inspired me.”

INtact is not an addiction service but many of the rangatahi Melody works with do use alcohol or other substances and her early work experience means she can put on her AOD hat if necessary.

“A lot of my work is about giving these youth their self-esteem back, their self-belief. Many are disconnected from their whakapapa. We take small steps, often starting with story – Te Ao Māori pūrākau. We talk about the reasons for pepeha, whakapapa and our connection with atua (gods). They get to see the strength and mana within themselves,” she says.

Many of the rangatahi have experienced a lot of trauma and now with Covid-19, Melody sees how they are even more anxious, which in turn can lead to substance use.

“It’s a whole other society for kids today. They still need support and guidance and cultural support is fundamental in this space.”

Melody also runs cultural and AOD workshops in Huntly with a pre-employment service called Oho Mauri, working with children who don’t fit in the traditional school system but still imagine a positive future for themselves.

Twenty children participate for 10 weeks. They can earn NCEA credits and prepare for the workplace.

Melody shares pūrākau and mātauranga she was taught from uni.

“I break it right down so the rangatahi leave with understanding and not just a sore head from info overload.”

A positive spin-off from Melody’s university study is that her children, aged from 17 down to four, feel at home on campus too. They’ve even attended lectures with their mother and they talk about going to university as if it’s the most natural thing in the world.

“I tell them I didn’t start until I was 30, but they don’t have to wait until then. Just exposing them to it, whether they go or not, they know it’s an option, that it’s possible.”

The call of the Waikato is licensed under a Creative Commons Attribution 4.0 International License. 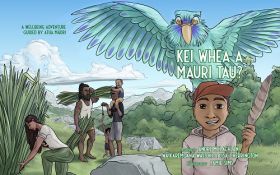