As Russia and Ukraine trade blame for prisoner-of-war deaths, what becomes of the Geneva Convention? 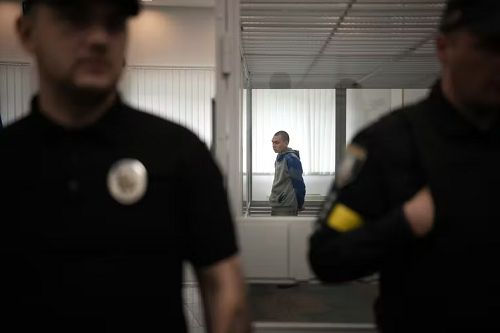 Russian soldier Vadim Shishimarin at a May hearing in Kyiv where he was given a life sentence for killing a civilian. GETTY IMAGES

The deaths of more than 50 Ukrainian prisoners of war last week is not only an apparent war crime, but also another sign the situation is becoming a race to the bottom when it comes to international law and conventions.

Ukraine and Russia have blamed each other for the attack on the prison in Russian-occupied Donetsk. Ukraine also claims prisoners were being tortured and murdered there. Russia’s British embassy later posted on Twitter that Ukrainian Azov battalion soldiers deserved a “humiliating death” by hanging.

But amid the accusations and counter-accusations of atrocities being committed against prisoners of war, some simple facts are easily overlooked: rules already exist to prevent such horrors, and they apply in Ukraine.

Prisoners of war are explicitly covered by the Third Geneva Convention, drawn up in 1949 to replace the old Prisoners of War Convention of 1929 after the awful lessons of the second world war.

Both Russia and Ukraine are signatories, meaning they have promised to respect it in all circumstances. It’s important to note this is not the protocol of the Geneva Conventions Russian President Vladimir Putin recently quit.

Restraint during a war isn’t easy, but it is essential nonetheless. As well as respecting basic humanity and honour, the rules – which have operated for over 100 years – help combatants build the confidence to eventually find peace.

In the sense that it helps avoid escalating revenge and reprisal for attacks against the defenceless, respect for prisoners of war is also a pragmatic act of self-interest.

Adherence in Ukraine to the fundamental conditions of the Geneva Convention has been hard to gauge, however. Apart from occasional exchanges of prisoners of war, exactly how many prisoners have been taken by each side, and where they are held, remains largely unknown.

While the Red Cross has been able to visit some POWs and other detainees, it has not been granted access to visit them all. The problem is compounded by claims that some combatants taken on the battlefield are mercenaries and therefore do not count as prisoners of war, meaning they may be executed.

Further complicating things is that both sides are promising to put prisoners on trial for war crimes. With Russia holding over 1,100 Ukrainian prisoners and Ukraine making over 15,000 allegations of war crimes, both parties need to publicly re-pledge to the Geneva Convention on prisoners of war before things escalate.

Rights of the prisoner

The basic rules governing the treatment of prisoners of war are simple enough to state:

Beyond these rules, representatives from third-party countries or the Red Cross should be permitted to visit and interview (without witnesses) prisoners and their legal representatives.

And any disputes about the application of the convention rules should be resolved through an enquiry by an independent third party.

It’s the handling of war trials in particular that requires most restraint. Although prisoners cannot be tried simply for fighting against their enemy, the Geneva Convention allows trials for grave breaches of the laws of war (such as murder or torture) – and even the death penalty if the domestic law of the detaining power includes it.

And despite judicial safeguards relating to fairness and the rights and means of legal defence, there is still the risk of a tit-for-tat process: one side finds a prisoner guilty, the other side responds in kind.

The best way through this is to allow the International Criminal Court (already pursuing its own investigations into the situation in Ukraine) to take the lead, giving the process real independence and integrity.

Trouble is, Russia has withdrawn from the International Criminal Court – just another measure of how far the observation of the laws of war has been eroded in Ukraine.