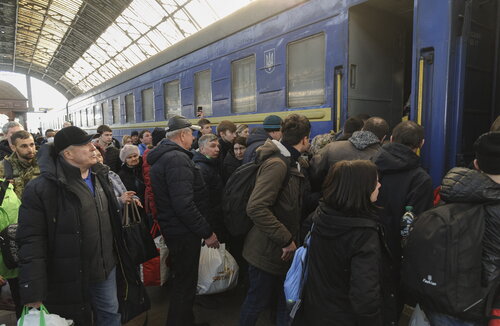 Ukrainian refugees in Lviv board a train for Poland, March 15. AAP

But as the war nears the one-month mark, there is more that can be done. In particular, the New Zealand government needs to look at five potential ways it can support the Ukrainian people and government and help international efforts to punish Russian aggression.

The New Zealand government actively helped the governments of Afghanistan and Iraq  to defend themselves. But the current administration seems unwilling to do the same for Ukraine, despite the fact it is the victim of an illegal invasion by a superpower.

It may be small-scale, but the symbolism of helping the Ukrainian defence matters. The excuse that New Zealand has no surplus kit is lamentable. It should provide whatever it has now (via Australia, which can deliver it) and restock as required. At this moment, Ukraine needs it more than New Zealand does.

Both Ukraine and Russia are trying to internationalise the conflict by calling for foreign volunteers. Private contractors or mercenaries are also in high demand.  There will undoubtedly be New Zealanders, including current or former Defence Force personnel, who are tempted to go.

While those with dual nationality (New Zealand and Ukrainian or Russian) will have some legal standing in the conflict, those without would risk execution if captured.

Current members of the New Zealand military risk being charged with mutiny if they attempt to serve a foreign power while still in uniform. Fighting as a mercenary overseas is also illegal under New Zealand law.

For New Zealanders motivated by ideology (rather than money), the government also needs to be explicit about the difference between fighting on the Ukrainian and Russian sides. One is acting like a terrorist organisation, and volunteers should be treated as such (much as New Zealand treated those leaving to join ISIS).

3. Open the door to refugees

The 2.8 million people who have already fled Ukraine is an exodus of unprecedented speed and scale. The government will need to extend its annual refugee quota (currently 1,500) and make some emergency decisions.

The recent approval of temporary sanctuary for around 4,000 family members of Ukrainians already in New Zealand is an excellent start. But the government  needs to go further, with a focus on actual refugees, and commit to a number above the existing quota.

There is precedent to guide this, not least because the origins of New Zealand’s refugee policy lie in the same part of the world. In 1944 New Zealand accepted 733 Polish children and 102 adults fleeing war-torn Europe (including deportation to the Soviet Union).

The present generation can do better – at least double what was offered during the second world war.

Commendable as it is, the new Russian Sanctions Act, which targets specific individuals and entities supporting the Russian war effort, is only a first step.

As part of wider economic pressure already being applied internationally, New Zealand can still allow trade in some Russian products but use import duties to make them uncompetitive.

A number of countries have already started down this road, with the removal of Russia’s “most favoured nation” trade status. New Zealand should be prepared to act similarly – and expect Russia to reply in kind against New Zealand exports.

Despite calls by the parliamentary opposition, New Zealand should not unilaterally expel the Russian ambassador. Such actions are normally a last resort, when countries are actually at war or there has been extreme interference in the host nation’s sovereignty.

In the case of Ukraine, for now at least, diplomacy has not run its course. Furthermore, it’s highly likely such a step would result in the New Zealand ambassador in Moscow being made persona non grata in response. New Zealand’s multiple interests in Russia would be left without official representation or support.

At a domestic level, the government should lead by example and not allow anger at Putin’s aggression to harden into anti-Russian sentiment. This means clearly identifying who and what should be subject to sanctions, observing due process and acting as fairly as possible.

Most Russians with citizenship or links to New Zealand will not be sanctions targets, anyway. Many will be opposed to Putin’s war. Ensuring tolerance, respect and protection is not only the right thing to do, it will help avoid reciprocal action against New Zealanders living in Russia.