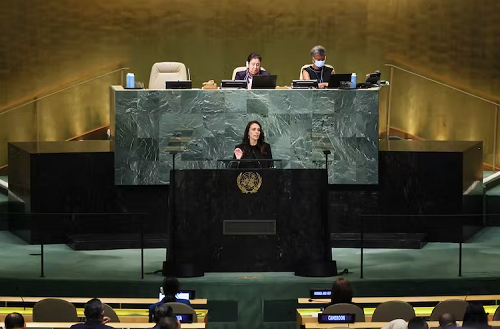 Since Jacinda Ardern described the state of world affairs as “bloody messy” earlier this year there have been few, if any, signs of improvement. Ukraine, China, nuclear proliferation and the lasting impacts of a global pandemic all present urgent, unresolved challenges.

For a small country in an increasingly lawless world this is both dangerous and confronting. Without the military or economic scale to influence events directly, New Zealand relies on its voice and ability to persuade.

But by placing its faith in a rules-based order and United Nations processes, New Zealand also has to work with – and sometimes around – highly imperfect systems. In some areas of international law and policy the machinery is failing. It’s unclear what the next best step might be.

Given these uncertainties, then, where has New Zealand done well on the international stage, and where might it need to find a louder voice or more constructive proposals?

Strength and clarity have been most evident in New Zealand’s response to the Russian attack on Ukraine. There has been no hint of joining the abstainers or waverers at crucial UN votes condemning Russia’s actions.

While it can be argued New Zealand could do more in terms of sanctions and support for the Ukrainian military, the government has made good use of the available international forums.

Unfortunately, similar avenues have been blocked when it comes to other critical issues New Zealand has a vested interest in seeing resolved properly.

This has been especially apparent in the debate about human rights abuses in China, and allegations of genocide made by some countries over the treatment of Uyghur Muslims in Xinjiang.

New Zealand and some other countries correctly avoided using the word “genocide”, which has a precise legal meaning best applied by UN experts, not domestic politicians. Instead, the government called on China to provide meaningful and unfettered access to UN and other independent observers.

While not perfect, the visit went ahead. The eventual report by outgoing UN human rights commissioner Michelle Bachelet concluded that China had committed serious human rights violations, which could amount to crimes against humanity.

This should have forced the international community to act. Instead, 19 countries voted with China to block a debate at the UN Human Rights Council (17 wanted the debate, 11 abstained). The upshot was that China succeeded in driving the issue into a diplomatic dead-end.

Allowing an organisation designed to protect victims to be controlled by alleged perpetrators isn’t something New Zealand should accept. The government should make it a diplomatic priority to become a member of the council, and it should use every opportunity to speak out and keep the issue in the global spotlight.

Elsewhere, New Zealand’s foreign policy can arguably be found wanting – most evidently, perhaps, in the area of nuclear arms regulation.

Advocating for the complete prohibition of all nuclear weapons, as the prime minister did at the UN in September, might be inspiring and also good domestic politics, but it doesn’t make the world safer.

With the risk of nuclear conflagration at its highest since the Cuban missile crisis, a better immediate goal would be improving the regulation, rather than prohibition, of nuclear weapons. This would entail convincing nuclear states to take their weapons off “hair-trigger alert”.

The other goals should be the adoption of a no-first-use policy by all nuclear powers (only China has made such a commitment so far), and a push for regional arms control in the Indo-Pacific to rein in India, Pakistan and China.

Finally, there is the danger of vital law and policy not just failing, but not even being born. This is the case with the World Health Organization’s so-called “pandemic treaty”, designed to better prevent, prepare for and respond to the next global pandemic.

New Zealand set out some admirable goals in its submission in April, but these have been watered down or are missing from the first working draft of the proposed agreement.

This shouldn’t be accepted lightly given the lessons of the past two-and-a-half years. Transparency by governments, a precautionary approach and the meaningful involvement of non-state actors will be essential.

Similarly, improved oversight of the 59 laboratories spread across 23 countries that work with the most dangerous pathogens is critical. Currently, only a quarter of these labs score highly on safety. The proposed treaty does little to demand the kind of biosecurity protocols and robust regulatory systems required to better protect present and future generations.

As with the other urgent and difficult issues mentioned here, New Zealand’s future is directly connected to what happens elsewhere in the world. The challenge now is to keep adapting to this changing global order while being an effective voice for reason and the rule of law.