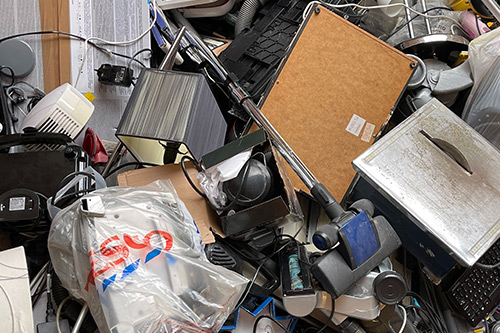 Don’t throw out that iPhone, repair it!

Waste, and e-waste in particular, is a world-wide problem, exacerbated by the fact so many electronic devices can’t be easily fixed when they break down, often because parts are obsolete, or they can only be fixed by authorised repairers. Rather than get your phone, laptop, TV or coffee maker repaired, it’s often more convenient and less expensive to buy a new one.

But worldwide there is also a movement striving for a circular economy, replacing the ‘take-make-waste’ linear economy to one where waste, pollution and greenhouse gases produced by industries and materials are kept in circulation and natural systems regenerated.

Part of the circular economy includes a ‘right to repair’ and University of Waikato law student Win Thandar Zaw has been researching how legislation might need to change in New Zealand to give consumers more choice and force manufacturers to make parts, diagnostic tools, and diagrams available to third parties and buyers.

Thandar, who grew up in Myanmar, went to university there and then worked for a multinational law firm, says she’s always been curious about how legal architecture can be shaped to drive toward a sustainable society. So she relished the opportunity to come to the University of Waikato to study aspects of it for her master’s thesis.

“The interface needed to diagnose defective consumer electronics is digitally embedded in the product and protected by digital locks that require passwords or special tools to bypass,” she says.

Apple and John Deere are two high-profile companies that are renowned for having technical protection measures (TMPs) that limit what consumers can do with their devices.

But pressure is being put on them to change and recently Apple announced that a self-service repair programme will launch next year in the US, permitting consumers to purchase spare parts and tools directly from Apple and perform their own repairs on some iPhones and Mac computers.

"New Zealand lags behind other countries such as the US and the EU in relation to the right to repair,” Thandar says. “I think the New Zealand Government should follow in the footsteps of the US Federal Trade Commission to exert pressure on tech companies like Apple.

“What I discovered during my research is that New Zealand’s consumer law framework is insufficient to fully implement the right to repair. This surprised me. But the right to repair is intertwined with other complicated legal issues, such as intellectual property protection and anti-competitive behaviour. There’d need to be changes to several Acts for New Zealand to be able to embed it.”

She says New Zealand would need to close the loophole where manufacturers can get out of their obligations to provide spare parts and repair facilities under the framework of the Consumer Guarantees Act 1993.

“In addition, the Commerce Act 1986 and the Copyright Act 1994 can be amended to remove barriers in the repair market and promote the right to repair principles. For instance, the Copyright Act 1994 prohibits the circumvention of TMPs that prevent consumers or independent repairers from accessing the underlying content.”

Thandar’s master’s research has intensified her interest in the circular economy and she’s now planning to study for a PhD.

She’s in the right place because the University of Waikato is leading Āmiomio Aotearoa, a transdisciplinary, multi-partner research project funded by the Ministry for Business, Innovation and Employment focussed on developing a concept for a circular economy in New Zealand.

Thandar is currently working on the project as a summer research assistant with the team researching law and policy.

One of the lead researchers on Āmiomio Aotearoa is Professor Barry Barton. He was Thandar’s master’s supervisor and says that Thandar’s work is particularly valuable for drawing attention to the idea of the circular economy in the way that goods are designed, manufactured and sold.

“It’s a concept that is much broader than waste and recycling. There’s a lot of policy interest at the moment in embedding circularity in New Zealand law and practices, so her work is very timely.”

Fighting the tide of electronic waste is licensed under a Creative Commons Attribution 4.0 International License.