Family, education and the law are of the utmost importance to Samoa District Court Judge Alalatoa Rosella Viane Papali’i who has carved a path through four qualifications at the University of Waikato.

Rosella came from Samoa to Waikato in 1993 after being awarded a Samoa Government scholarship sponsored by NZODA. “We didn’t get to choose the university, we qualified and were assigned to a university and degree; 11 of us came to Waikato,” she says.

At first Rosella found the transition from Samoa to New Zealand daunting. “I had never been anywhere outside of Samoa but Waikato became home away from home and I flourished there. It is a place I hold dear to me and close to my heart. I made lifetime friends who became my family.”

After completing a Bachelor of Social Sciences (BSocSc) and a Diploma of Teaching (Secondary) and having her first son, Rosella worked part time as a relief teacher at Hillcrest High School. However, her passion was the law and that desire brought her back to Waikato in 2001 to begin a Bachelor of Laws (LLB). She had two more sons and by the time she completed her Masters of Laws (LLM), she had a fourth on the way.

The children and her parents inspired her to complete her studies and secure a good job to raise her children in a stable family environment. She went to lectures, labs and the Library with her boys and a mattress in tow. “The volume of work was challenging, and there are no shortcuts when studying law. I had to find a balance between raising my boys and my studes.” Rosella graduated with a LLB and LLM and was admitted to the New Zealand Bar in May 2004.

Rosella returned to Samoa in 2004 and was admitted to the Samoa Supreme Court and settled into life with her family. She worked as an associate at Toailoa Law Firm before establishing her own private law firm in 2009. During this time, she served on the Samoa Law Society Executive Council for more than 10 years.

In March 2017, Rosella was appointed as a District Court Judge by the Samoa Judicial Services Commission on recommendation from Chief Justice Sapolu. Rosella says, “Being a judge has its ups and downs but with the Lord by my side, anything is possible. Passing judgement is not always easy but if I can sleep at night knowing that I have passed a fair and just judgement, then I am doing my job. I like to believe that I have done my job of upholding the rule of law and discharging my judicial duties to my people.”

The District Court has the highest volume of recorded cases in Samoa; Rosella has been a judge there for more than five years and presides on civil, criminal and traffic cases and is in charge of the Alcohol and Drugs Therapeutic Court and the Coroners Court. She also presides in the Family Court, Family Violence Court and Youth Court.

“The therapeutic courts are a highlight of my work as it focuses on therapy and rehabilitation of offenders so they become better people.” The model is based on the American model which was adopted in New Zealand and Samoa and has been contextualised to consider Samoa’s unique cultural perspective. “We recognise there is an important part that each person, family, community leader and church play in our community in rehabilitating our people. This process assists in reducing reoffending and keeping Samoa safe.” 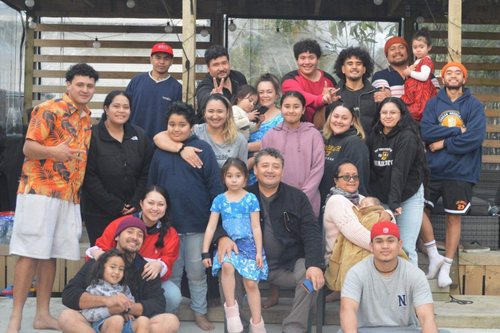 Rosella has a large blended family. She and her husband, Alaiasa Schwartz Hunt, have ensured their 12 children appreciate the value of education. It’s a very studious household with five children already tertiary graduates. Rosella’s family has a strong affiliation with Waikato University including her husband who is a former student, her eldest son Romero is an alumnus (LLM(Hons)) and two of her sons are current students. She and her husband have additional children studying in Auckland.

She speaks fondly of her time at Waikato University. “I have cherished memories from my time at Waikato. I would recommend the learning experience and close-knit community to anyone, which is evident in the fact that we have sent our children there.”

As a seasoned student, Rosella has good advice for the next generation of students. “The Lord has a plan for each of us. Have patience and find your balance; read widely and don’t be shy to use all the help available online and on campus. Walk the path that you want to carve for your life, enjoy your experience and be kind to yourself.”

From late nights at the library to the Samoan District Court is licensed under a Creative Commons Attribution 4.0 International License.