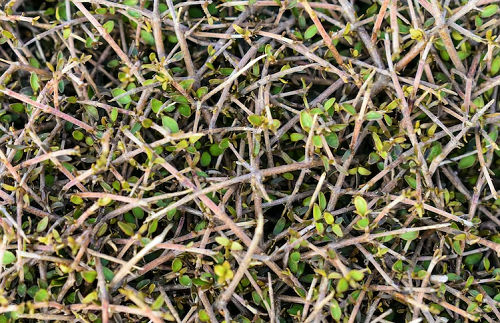 More than one in ten native trees and shrubs have small leaves spaced far apart on wiry interlaced branches, often growing in a zig-zag pattern. Once the preserve of botanists, some of these plants have recently gained popularity as ornamentals.

Nowhere else on Earth has this “divaricate” growth form arisen independently in so many plant families.

The 19th-century German botanist Ludwig Diels noted that small-leaved shrubs are typical of dry climates. He thought the divaricate form might have arisen in response to cold, dry conditions during the Ice Ages.

In the 1970s, the competing “moa browsing” hypothesis emerged, arguing the divaricate form is a now-anachronistic defence against browsing by the large flightless birds that went extinct shortly after Polynesian settlement.

Experiments have since lent support to the browsing hypothesis. Yet the concentration of divaricate plants in frosty and droughty districts suggests climate is also somehow involved.

So does evidence that the small leaves of divaricates are less vulnerable to chilling than large leaves. But climate does not seem to explain the unusual toughness of the branchlets of divaricate plants.

Molecular dating shows most divaricate plant species arose within the last five million years. But fossils and genetic evidence show moa have been here much longer than that. This means moa browsing alone does not explain the evolution of divaricate forms in so many plant families.

The evidence seems more consistent with a newer synthetic hypothesis that moa browsing had more impact when plants were exposed to a new combination of circumstances: worldwide cooling, the development of frosty, droughty climates in the lee of the recently uplifted Southern Alps, and fertile new soils derived from glacial outwash.

Frosty and droughty climates posed direct physiological challenges to plants, but they also left them more exposed to browsing by preventing them from growing quickly out of reach of moa. Climatic restrictions on growth thus probably made anti-browsing defences more important for plant survival.

Support for this hypothesis comes from a recent experiment, which found climate influenced the impact of deer browsing on competition between divaricate plants and their broad-leaved relatives growing in treefall gaps.

Furthermore, the fertile new soils created by outwash from glaciers would have enhanced the nutrient content of plant tissues, probably resulting in increased browsing pressure. Studies of African savannas show that thorns and divaricate-like growth forms are typical of fertile soils with abundant browsing mammals.

Do deer act as moa surrogates?

For several centuries after the extinction of the moa, there were no large browsers in New Zealand, until European settlers introduced deer and other hoofed animals. Although valued as game animals and a food source, deer are also considered pests because of their impact on native vegetation.

Feeding experiments have shown both avian and hoofed herbivores are unenthusiastic about eating divaricate plants if alternatives with large soft leaves are available. The spacing of small leaves far apart along wiry branchlets reduces bite size and makes it difficult for browsers to meet their nutritional needs.

Scientists have studied ancient moa diets by identifying pollen grains in fossilised poo (coprolites). Data interpretation is hampered by our inability to identify pollen to species level in plant groups that include both divaricate and broad-leaved species. But it would seem likely that divaricate plants presented similar nutritional challenges to moa.

Analysis of moa coprolites suggests forest understories a millennium ago were more diverse than those we see today, after more than 150 years of browsing by deer. This suggests moa had less impact on vegetation than deer do today.

Factors limiting the impact of moa on vegetation

Unlike deer in contemporary New Zealand, moa faced a deadly predator throughout the entire country: the now-extinct Haast’s eagle. Although moa could safely browse under forest canopies, they would have been at risk at watering sites and in open areas.

In contrast, although deer face strong hunting pressure in some areas, recreational hunting has little impact in remote and rugged areas like the Kaweka ranges, where uncontrolled populations of sika deer threaten regeneration of even relatively unpalatable trees like mountain beech.

Fast-growing palatable shrubs and small trees like karamū, patē and māhoe probably got their best chance to escape moa browsing when treefalls let in enough light to enable them to grow quickly out of reach, at least in warmer districts where such plants can grow more than a metre in one growing season.

Treefall gaps must have offered two other advantages for palatable plants. The remains of fallen trees can hamper access by large herbivores, and canopy openings would have exposed moa to attack by Haast’s eagle.

Moa were probably less able to exploit vegetation on steep slopes than deer and goats are today. The impact of moa across New Zealand landscapes would therefore probably have been less pervasive than the current impact of hoofed browsers.

The future of deer in New Zealand

Deer could act as imperfect surrogates for moa, but only if subject to effective control throughout the country.

Aerial 1080 drops to control rats, stoats and possums also usually kill deer, though the mortality rate varies widely. That is one way deer populations could be kept to acceptable levels in remote and rugged areas, where recreational hunting pressure is insignificant. Aerial culling by shooting has also shown potential.

Commercial hunting cannot be relied on to control deer, because of the vagaries of the market. When the price of venison falls, there is little incentive to hunt deer. Aerial 1080 or aerial culling therefore currently seem the only realistic ways to curb the impact of deer in remote and rugged areas.