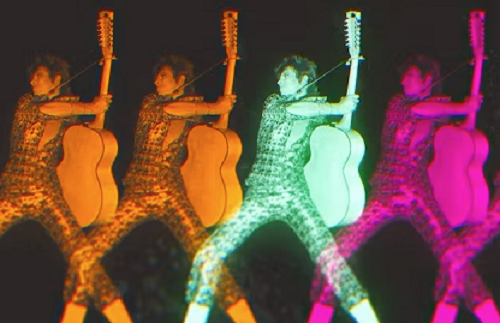 Don’t fake it baby, lay the real thing on me

But as a Bowie fan of 40 years, this film was a transformative experience for me because of the integrity with which Morgen reassembled “the real thing” to make something authentic and new.

Inspired by Bowie’s cautionary words about comfort and his philosophy to “always go further into the water than you feel you’re capable of being in”, Morgen embarked on a mission that would take him far outside his comfort zone.

Boldly eschewing the conventional biopic format, he immersed himself in a seven-year creative process – one that has led to a subjective but respectful representation of the artist who helped him navigate his own teenage journeys.

Morgen brings these things to life by punctuating them with sonic and visual effects. Bravely facing the potential wrath of Bowie devotees, he takes the creative liberty of disassembling and reanimating Bowie’s hand-drawn sketches, storyboards and paintings.

A risky way to treat the work of a deceased artist, the approach nonetheless works because Morgen is channelling the Bowie “on his shoulder”. This is his reality of Bowie, but it allows space for viewers to fill in the gaps. As he explained recently:

Bowie invited us the way kabuki does, to kind of project and fill in the blanks. And so I tried to create a film in that manner […] We all have our own Bowie. You have your Bowie, I have my Bowie. I wanted the canvas to reflect back to each viewer their own Bowie, and ultimately themselves.

Taking two years to familiarise himself with millions of archival pieces, Morgen developed an intuitive sense about which materials to use and how they would project when blown up on a cinema screen. By allowing this raw material to retain flaws such as scratches, camera shake and blur, he conjures nostalgia for a moment in time.

Transported to the Hammersmith Odeon in 1973, I marvelled at the grainy texture of the film stock used to shoot D.A. Pennebaker’s film of the famous last Ziggy Stardust concert. I absorbed the texture of Bowie’s hair and the colour of his mismatched eyes in extreme closeups from Mick Rock’s music video Life On Mars? from the same year.

Grounding the film in reality, the rawness and heightened proximity of these projections enhance the sensory experience. One moment I was on stage with Bowie, just behind his shoulder, experiencing his exhilaration as he stepped towards throngs of adoring fans. Next, I was one of those fans in full Ziggy garb, reaching out to touch Bowie on that stage.

This sense of intimacy and immersion in Bowie’s life explains why Moonage Daydream is such a treat for fans. But why did Bowie’s estate give their wholehearted approval to this film and not others?

Firstly, rather than relying on actors or expert commentators, the film allows Bowie to tell his story through his own words and his own art. Secondly, Morgen has taken more than inspiration from Bowie’s philosophy about life and creativity. He approached Moonage Daydream in a way that mirrors Bowie’s own creative process.

Often described as a cultural magpie, Bowie was a rampant forager who used methods such as cut-up and collage to weave together a diverse array of inspirations and found materials. Morgen uses similar methods with archive material from across Bowie’s expansive oeuvre.

Morgen also uses cut-up and collage methods to show how Bowie fused the Pierrot persona (derived from the Commedia dell'arte performance form) with visual references derived from surrealist and German expressionist films, along with the aesthetics of the fledgling New Romantic subculture.

Mirroring Bowie’s creative process, the approach also replicates the artist’s treatment of time as medium, and his penchant for time travel. His songs, music videos and performances portray a constant, dizzying transit between past, present and future – something Bowie described as “future nostalgia”.

Ironically, Morgen’s non-linear editing works in tension with the film’s overarching linear chronology. This complex structure is appropriate, since it portrays the temporal fluidity and “loose continuity” that Bowie wove across five decades and several mediums.

This sense of time travel extends to the treatment of the songs, too. Morgen worked with Bowie’s long-time friend and collaborator Tony Visconti, who uses cut-up and collage to create new soundscapes by merging isolated tracks from the original song recordings.

At one point, Blackstar (2016) gradually begins to merge with parts of Memory of a Free Festival (1970) and other songs. Combined with visual collage, this surprising mashup forms a densely layered audiovisual bricolage that takes the audience on an exhilarating trip through time and space.

Recalling the liberating experience of dancing up the red carpet at the premiere for Moonage Daydream, and the creative process behind this almost psychedelic filmic experience, Morgen told one interviewer:

If you ingest Bowie into your veins for seven years, you’re probably going to be a better person at the end of it than you were when you started […] It’s like having a natural high, I mean it’s like the endorphins are all alert.

I would never have arrived at that perspective without embracing his teachings, his philosophies towards creation.

Creating this film was a life changing experience for Morgen. Moonage Daydream is a bold work of art that promises a transformative experience for all of us. I saw my Bowie reflected back from Morgen’s canvas. Will you see your Bowie?