Nation-building or nature-destroying? Why it’s time NZ faced up to the environmental damage of its colonial past 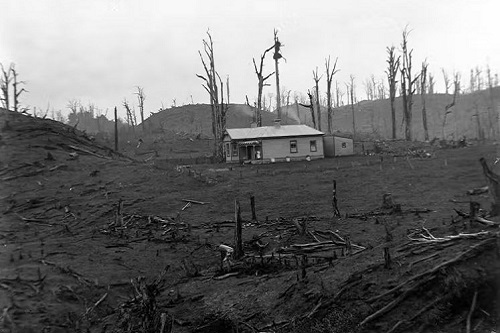 The ways in which New Zealand remembers European colonisation have changed markedly in recent years. Critics have been chipping away at the public image of Captain James Cook, the New Zealand Wars have been included in the new compulsory history curriculum, and streets honouring colonial figures have been renamed.

However, while New Zealand is slowly recognising the historical injustices suffered by Māori, the same reappraisal hasn’t extended to the natural environment. The dramatic transformation of “wild untamed nature” into “productive land” by European settlers in the 1800s continues to be widely celebrated as a testament to Kiwi ingenuity and hard work.

My soon-to-be published research, based on a survey of 1,100 people, suggests this narrative could be partly responsible for New Zealanders’ apparent complacency on climate change compared to other countries.

Essentially, it appears those who refuse the “taming of nature” narrative – and instead recognise the 19th century as a period of environmental destruction – are more likely to have what psychologists call an “environmental self-identity”.

The findings further suggest that changing individual behaviour as a strategy to tackle environmental threats (as recommended in the Climate Commission’s 2021 report) might mean addressing how we communicate the history of environmental change in schools, museums and at public heritage sites.

In particular, this might mean framing what happened in the 1800s as more about loss than achievement.

A story of progress or decline?

Prior to human settlement, Aotearoa New Zealand had been isolated from other landmasses for around 60 million years. The result was the evolution of a unique ecosystem that was highly vulnerable to disturbances.

Māori arrived around 1300 and brought with them invasive mammals: the Polynesian dog (kurī) and the Pacific rat (kiore). Through widespread burning, Māori – either intentionally or accidentally – destroyed large areas of forest in drier eastern parts of Te Wai Pounamu (South Island) and Te Ika a Māui (North Island).

Moreover, archaeological research suggests a number of bird species were hunted to extinction, including moa and adzebill.

European settlers began arriving in large numbers after the signing of the Treaty of Waitangi in 1840. On the back of (often dubious) purchase deals, the introduction of private property laws and forceful confiscation, vast areas of Māori land ended up in European hands.

What followed was a classic example of what’s been called “ecological imperialism”. Much of the remaining forest was transformed into grassland for sheep and cattle. Acclimatisation societies introduced other familiar animals and plants from Europe.

Purposefully and accidentally introduced species – such as stoats and ship rats – wreaked havoc on the native wildlife. Within a few decades of European colonisation, several birds went extinct, including the huia, the piopio and the laughing owl. European capitalism also had a devastating impact on seal and whale populations.

Despite the long history of environmental change, it is the transformation of the landscape in the 1800s that occupies the most prominent place in New Zealand’s collective memory, relative to other periods. The reason is fairly simple: the era provides what memory scholars call a “usable past” – usable because it helps to construct a distinctive New Zealand identity in the present.

Similar to historical events such as the signing of the Treaty of Waitangi and the Gallipoli campaign, the “taming of nature” in the 1800s is remembered as an experience that forged the nation. European settlers – in particular the bushmen who cleared the forest to make way for farms and pastures – are portrayed as the prototypical New Zealander.

Their hard work and “number eight wire” ingenuity still define popular versions of the national character today. And media continue to portray the countryside as the “real” New Zealand, including in advertisements and television shows.

It should be stressed this is largely a narrative of the European settler majority. For Māori communities, the transformation of the landscape under European colonialism is more a story of decline than progress. Māori memories of environmental change in the 1800s are intertwined with memories of colonial violence and dispossession.

My survey sought to explore whether different interpretations of New Zealand’s environmental history shape people’s attitudes towards nature, and whether those interpretations make it more or less likely that people see themselves as someone who acts in an “environmentally friendly” way – the environmental self-identity mentioned earlier.

A key finding is that those respondents who pinpointed the 1800s – rather than Māori settlement or the second half of the 20th century – as the most destructive period of environmental change were most likely to describe themselves as environmentally friendly.

For Māori respondents, this is perhaps not entirely surprising. An awareness of injustices suffered in the 1800s tends to go hand in hand with a strong spiritual connection with the land and a sense of responsibility towards nature.

More significant is that European New Zealanders who recognise the environmentally destructive role of 19th-century settlers were more likely to identify themselves as environmentally friendly than those who point to other periods in history.

It appears those European New Zealanders who acknowledge the environmental destruction caused by their ancestors feel a greater responsibility to fix these mistakes in the present.

How we remember the past matters

To encourage more pro-environmental behaviours, the survey results suggest New Zealand needs to move away from narratives that glorify environmental change of the early colonial era as an expression of national character.

Such interpretations of history reinforce ideas that get in the way of achieving a sustainable future. They promote a strongly utilitarian perspective on our relationship with the environment. Nature is reduced to a commodity to be exploited in the pursuit of human interests.

New Zealand has taken the first steps to work through its violent political past, but this process also needs to include colonialism’s devastating effects on the environment.

Rather than remembering the transformation of the landscape by European settlers as a nation-defining moment, public history should encourage an examination of human complicity in the destruction of nature. Hopefully, this can help transform such understanding into present-day environmental action.