Samoa’s influential judge, Justice Leilani Tuala-Warren has dedicated her career to making a difference for her communities. For that, she has been awarded a Distinguished Alumni Award from the University of Waikato.

Justice Tuala-Warren has a long-standing relationship with the University of Waikato. Graduating with a Bachelor of Laws in 1997 and a Master of Laws in 1998, she then returned in 2000 to teach the next generation of lawyers. She is an Honorary Lecturer for Te Piringa Faculty of Law.

Since then she has had an exceptional career working as a State Solicitor of the Attorney General and a Family and Commercial lawyer for Tuala & Tuala Law before being appointed the first Executive Director of the Samoa Law Reform Commission in 2008.

Just five years later, Chief Justice Patu Tiavaasue Falefatu Maka Sapolu invited her to become a judge of the District Court, and in doing so she became the second woman in Samoa appointed to the bench.

As a newly appointed judge, Justice Tuala-Warren was asked to establish the Family Court and the Family Violence Court, the only court of its kind in the Pacific outside of New Zealand.

“The Family Violence Court is a therapeutic court where the process is holistic and focuses on the whole family, including offenders and victims. I find this work really rewarding, and enjoy working with the families - they want to heal together, and it’s a process that works well in this country,” she says.

In 2016 she left the Family Violence Court to become a Justice of the Supreme Court of Samoa where she deals with serious offences and constitutional cases.

Justice Tuala-Warren has used her public profile for good by advocating for social issues within the Samoan community and by paving the way for women.

She says a career highlight was when she and her fellow Supreme Court judges worked to protect constitutional law during the 2021 Samoan Elections.

“We spent a lot of time reading and writing. It lifted me and I thought, ‘this is why I am here’.”

She is one of four Distinguished Alumni awardees to be recognised at a ceremony later this month along with director Jennifer Kerr, Māori business leaders and governors Hinerangi Raumati MNZM and Jamie Tuuta. 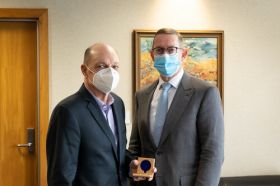