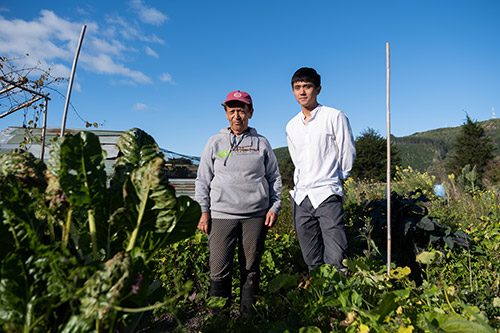 Grinding rock and spreading it onto farmland doesn’t seem like a way to fight carbon emissions, but a new research trial by the Earth-Life Interactions (ELI) research group based at the University of Waikato (Tauranga campus) and Ngāti Pūkenga are exploring a novel approach for New Zealand to capture carbon dioxide.

Lead researcher Terry Isson, together with Louis Schipper also from the University of Waikato has partnered with local iwi Ngāti Pūkenga and Ballance Agri-Nutrients to trial the use of finely-ground mafic rock on Bay of Plenty and Waikato farmland for carbon capture that could have global implications.

“It is time for us to radically re-imagine the way we live life on Earth. Achieving the goal of being carbon neutral by 2050 is no easy feat… it’s time for us to all be bold and creative,” Isson says.

“We are trying to speed up a natural Earth process that has been operating for billions of years. Very simply, rock types like dunite and basalt found in New Zealand, when ground up and spread onto soil such as agricultural land, have the power to draw-down carbon directly out of the atmosphere.

“The chemical break-up of these minerals changes where the carbon wants to live, moving it from the air, into water and eventually a rock. This product has similar properties to lime in that it raises the pH of the soil, but has additional benefits like the addition of nutrients and most importantly the capture of carbon directly from the atmosphere.”

Studies are being conducted on both pasture and crops on iwi-owned and managed farmland.

“Carbon capture research often focuses on point sources of emission, but these are uncommon in Aotearoa New Zealand, and this is the first large-scale attempt at diffused carbon capture directly from the atmosphere. If proven, the process will not only provide a pathway to carbon reduction but will also provide farmers a concrete way to offset their carbon footprint,” Isson says.

Rina Te Rehina from Ngāti Pūkenga says the iwi wants to be part of the solution, putting things back into balance (Mauri ora).

“If there is anything at all we can do to help this global climate problem on our land I don’t see why we should not engage,” Rina says.

“The world is still in a state of Mauri Noho (passive existence) and there are not enough of us taking action – it’s all Hui, no doee. Through this proposal we can achieve Mauri Oho (an awakening), and if successful this will take us one step closer to achieve Mauri Ora (a state of thriving).”

Isson says recent modeling suggests the process has the potential to reduce Aotearoa’s carbon emissions on the million-tonne scale, but the idea needs to be rigorously tested in the field.

“If this technology works, it has the potential to provide farmers and the agriculture industry with a method to actively lower emissions.”

The research has received seed funding and feedstock from Ballance Agri Nutrients, and there are ongoing discussions with the Ministry for Primary Industries (MPI) on the topic.

If successful, large-scale rollout of the process could happen within the next decade.

Tauranga research has potential to reduce carbon emissions on ‘million-tonne scale’ is licensed under a Creative Commons Attribution 4.0 International License.