Covid-19 gave Jasmine Campbell (Ngāpuhi) the push she needed to change careers and enrol at university. The transition from tourism industry to teaching has earned her a Vice-Chancellor’s Adult Learner’s Award and a cash prize.

Jasmine, 30, had been working in the tourism industry on Australia’s Gold Coast when the pandemic began, and when visitor numbers declined she decided to move back home for a new start. She is currently in her second year of her Bachelor of Teaching (Primary) degree at the University of Waikato’s Tauranga campus.

Her decision paid off last Friday afternoon [26 August] when she was awarded the 2022 Vice-Chancellor’s Adult Learners’ Awards - one of four given out by the University at a ceremony at the Tauranga CBD campus.

The awards recognise the academic achievements and social contributions of outstanding adult learners at the University of Waikato who have chosen to undertake tertiary study later in life.

Recipients have to be at least 25 years old, in their second year of part- or full-time study at the University and be studying towards an undergraduate qualification. The awards were presented at an in-person ceremony by Vice-Chancellor Neil Quigley, and each recipient was also given a cash prize of $1000.

“I was so happy and excited when I found out [about the award],” says Jasmine, who was nominated by one of her lecturers.

“I didn’t even know how to write an essay when I first started. It is so nice to be recognised for all the hard work I’ve been putting in. It will also take the financial pressure off as I can’t work full-time while studying.”

The former Mount Maunganui College student had travelled to Australia after high school for a gap year, but “one year turned into 10,” she says, with stints working at Dreamworld, Whitewater World and SkyPoint Climb.

Jasmine admits that she “had no idea what she wanted to do, or if I wanted to go to University,” as a high school student, and returning to study in her late 20s was “a bit scary” at first.

“But I talked to my Nana, who went back to university in her 60s, and she told me that if she could do it, then so could I.”

Jasmine enrolled in the University’s Tauranga Jump Start programme in January 2021 to help prepare her for tertiary study. The support from lecturers and her experiences as a teaching student on practicum in local classrooms have also been positive.

“Seeing the children grow and develop new skills in the classroom each week was quite rewarding.”

A testament to her academic achievements, Jasmine was recently inducted into the Golden Key International Honour Society. She also works as a student ambassador, and has volunteered at Tauranga Open Day and Virtual Open Day.

In the future, Jasmine hopes to work as a primary school teacher in the Tauranga area, and perhaps do a master’s degree in Education.

“I’ve always loved working with kids,” says Jasmine. “Even when I was working in tourism, teaching kids to surf, I loved seeing them learn.” 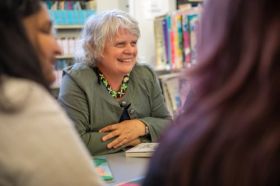 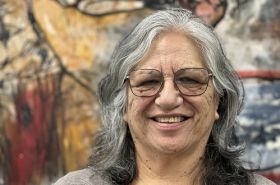 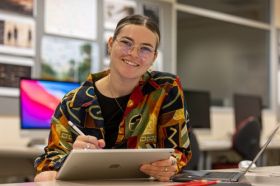