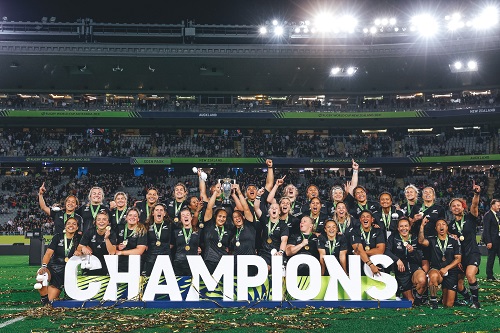 Saturday night’s heart-stopping 34-31 Women’s Rugby World Cup victory by the New Zealand Black Ferns over England was more than a great game, it was a milestone in women’s sport in general.

Played in front of 42,500 spectators at Auckland’s Eden Park, traditional home of men’s rugby and renowned “fortress” of the All Blacks, the match showcased the unique atmosphere created by the women’s game.

And coming so soon after the team’s troubled 2021 northern hemisphere tour – when relationships between Black Ferns players, coaches and management publicly broke down – the World Cup triumph was also the culmination of a highly successful rebuilding program, based on a strong team culture grounded in te ao Māori.

So while the win offers an important opportunity to reflect on how far the women’s game has come, the challenge now is to apply those lessons and ensure the game and women’s sport overall continue to grow.

A man’s world no longer

Speaking after the final,  Black Ferns coach Wayne Smith described the win as “the most phenomenal moment of my career”. Coming from a veteran of the men’s game, with a successful All Blacks and Super Rugby career behind him, it’s quite a claim.

But we have to ask why it has taken so long for the women’s game to see the kind of support it now receives. Part of the answer lies in rugby’s deeply entrenched history of being seen and valued as a male experience. It may be New Zealand’s national game, but that hasn’t meant rugby was seen as being for everyone.

In many ways, women’s rugby has been resisted, ignored and marginalised because it challenged dominant ideas about masculinity. While the women’s team has brought home more World Cup titles than the All Blacks have, they have been systemically underfunded and undervalued for decades.

As player and advocate for the women’s game Alice Soper put it recently:

It’s not just old-fashioned racism and sexism. Men have built rugby into their core identity. What does it mean if women are occupying that space?

In contrast to the fully professional English and French teams, the Black Ferns have only recently been offered some of the benefits of a professional performance program (which still pales in comparison to what the All Blacks receive).

While women’s rugby may only recently have captured the attention of mainstream New Zealand, the women’s game (including the seven-a-side version) has long had a strong community of passionate advocates fighting for space, funding, visibility and infrastructural support.

Over many decades, these women – many of them Māori – have volunteered to sustain and develop the game, innovating with women-led approaches grounded in culture and community. As well as local and regional groups, Women in Rugby Aotearoa (WIRA) has fought to build and nurture the culture.

The women’s game also has a surprisingly long history in New Zealand, stretching back a century before the Black Ferns first won an international tournament. Farah Rangikoepa Palmer, a former Black Fern and now academic and deputy chair of the New Zealand Rugby Board, has written extensively about the important intersections of Māori culture, gender and ethnicity in the evolution of women’s rugby in Aotearoa.

Those intersections were more visible than ever at this year’s World Cup, with twirling poi, haka and waiata all contributing to an undeniable festival atmosphere at games. The cultural and gender diversity of the Black Ferns, and the displays of female strength, power, joy, charisma and leadership, seemed to connect with an increasingly multicultural New Zealand.

The Black Ferns were even credited with uniting the country after some difficult and divisive years. The team certainly offered a powerful vision of a more culturally inclusive society with mana wahine at the heart.

Show them the money

After years of women’s sports teams having to do a lot with a little, we are witnessing a significant turning of the tide. Audiences in New Zealand and around the world are coming to recognise the phenomenal capacity of women’s sport to entertain and inspire.

As the crowds turn up, television and sponsors are also increasingly waking up to the potential of women’s sport to reach new audiences – and to reinvigorate existing ones.

At the same time, the long association between rugby and masculinity in Aotearoa may finally be changing. More women and girls play the sport than ever before, and their contribution can only continue to grow.

But sports organisations now need to respond to this quickly changing landscape. The cultural and gender diversity on the field needs to be reflected in boards and leadership structures, with more equitable and longer-term investment plans. While this work is under way at New Zealand Rugby, organisational change is hard and takes sustained effort.

Players and supporters are now calling for Rugby New Zealand to properly invest in the women’s game. As Black Fern Sarah Hirini said after the Eden Park final:

The old notion that people wouldn’t watch women’s sport is clearly a fallacy. But the new momentum has to be maintained. With funding, media coverage and investment, the future of women’s sport can be very bright indeed.

Holly Thorpe, Professor in Sociology of Sport and Gender, University of Waikato