Wei Cheng Phee is part of two important families. He is a member of the Phee family who for almost 30 years has sent more than 20 family members from Malaysia to Waikato to study and he is Dad to the Instagram-famous happy dog and grumpy cat duo, Casper and Romeo

The Phee family are no strangers to the University of Waikato. Wei Cheng was the 20th member of the family and part of the second generation to leave Malaysia to study at Waikato, and there is more to come.

Having so many family members based in Hamilton helped Wei Cheng make the move to Hamilton to study as a young boy.

“Because there are so many family members in Hamilton, it made it easier for me to leave my parents and join my wider family in the Waikato. It’s a sacrifice many family members have made to have a western education. Having family here allowed me to stay true to myself which is important for anyone who comes from overseas,” says Wei Chang.

His wider family are all Waikato Management School alumni, so it was unusual when Wei Cheng broke tradition and chose science. “In high school, I signed up for accounting and economics because that’s what my family did, but I had a curiosity about ‘what I didn’t know’. I had a chance to move into science and I knew I wanted to pursue a career in it."

While studying (2012 – 2014), he was part of numerous committees and was elected as the student representative on the University Council. He worked tirelessly to aid in governance and the student experience.

His campaigning for election was driven by a desire to give back and represent people. “When I was campaigning, no one knew who I was and I was told I was ‘brave’ to run against the current representative. I visited lecture halls and listened to what people wanted and told the students, ‘I can listen to your needs and execute them’ and that was how I was elected.”

Not only was he heavily involved in governance during his time at Waikato but he also represented New Zealand in Washington DC at the Students In Free Enterprise World Cup. He was recognised for his efforts by being awarded The Change Maker award in 2014 for embracing diversity and creating change in the community.

He says his time on the University Council was an eye-opener and a great opportunity to learn. “I liked bringing a mindset to the Council to represent the younger generation. It is not just about solving issues but how those decisions impact the future and helps me in what I do today.”

After graduating with a Bachelor of Science (BSc) majoring in Biotechnology, Wei Cheng was employed by Thermo Fisher Scientific, a global company supplying scientific equipment to clients in the research and science space. Wei Cheng continues work there today as a Product Specialist. 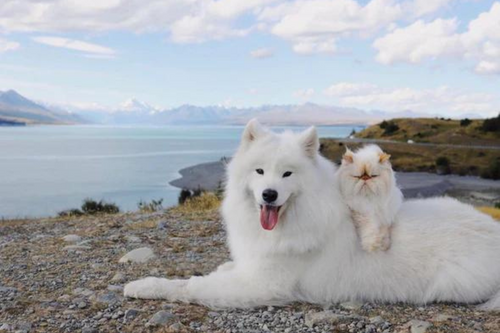 He and his wife Rinsa are the fur-parents of Casper and Romeo (@casperandromeo) who have over 68,000 Instagram followers. The page features gorgeous photos, taken by Rinsa, of the unlikely bond between Casper and Romeo and is lifting spirits around the world. The page has global fans and has had significant international media attention of late. They even have their own merchandise and website. In his spare time, Wei Cheng helps groom and photograph Casper and Romeo and sometimes they join him on his business outings to fan-clients.

Wei Cheng has fond memories of his time at Waikato and of his lectures. His advice to the next generation of learners is, “Ask yourself, ‘what will set you apart’?”

He remembers sitting in a lecture theatre with 400 other first-year students and realising they will complete their qualification at the same time. “I decided then to take opportunities to set me apart. The university has a lot to offer and it’s up to you to take those opportunities. It’s a mind-set that you want to have.”

Twenty members of the Phee family pave the way for Instagram-famous Dad is licensed under a Creative Commons Attribution 4.0 International License.