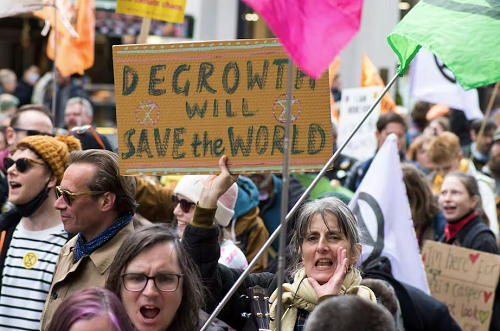 Will it really? Stuart Walden/Alamy

In the midst of today’s cost of living crisis, many people who are critical of the idea of economic growth see an opportunity. In their recent book The Future is Degrowth, for example, prominent advocates Matthias Schmelzer, Aaron Vansintjan and Andrea Vetter argue that the post-Covid inflation has predominantly been caused by the inherent instability in the capitalist system.

This came in the form of problems with global supply chains and the asset price inflation which stemmed from government action in response to the pandemic. Since the same system is, in their view, also responsible for causing climate change, moving away from it and curbing the economic growth on which it turns will help kill two birds with one stone.

Arguments like these recall and are directly influenced by a famous scientific report from 50 years ago called Limits to Growth. Written by a group of researchers commissioned by the Club of Rome think tank, it warned of an “overshoot and collapse” of the global economy within 100 years.

The researchers forecast that this decline would be caused by exponential growth in populations, industrialisation, pollution, food production and resource depletion. The answer, they said, was to move to a state of economic and ecological stability that would be sustainable far into the future.

When the oil crisis of October 1973 to March 1974 saw oil prices quadrupling, it was seen as vindicating the report’s prediction of a dramatic surge in the price of oil. A famous Newsweek edition from late 1973 ran with the headline “Running out of everything”, next to a picture of Uncle Sam looking into an empty cornucopia.

Yet contrary to the predictions in the Limits report, the oil shock was not caused by resource scarcity but by geopolitics. The Saudis and oil-supplier cartel Opec had imposed an oil embargo on the west to protest the US arming Israel in its wars against Syria and Egypt.

A similar misapprehension lies at the heart of the arguments by today’s degrowthers over the cost of living crisis. The oil and gas shortages causing soaring prices are mainly due to the Ukraine war and a fall in supplies due to the majors investing less in production because of the net zero agenda.

Not only did the writers of the Limits report predict a spike in oil prices for the wrong reasons, they also failed to consider how the market would respond. Higher prices reduced demand and incentivised energy efficient investment and oil exploration, with major new reserves being identified.

Growth has not (yet) been constrained by a lack of resources, partly because technological advances enable us to generate more from less, and partly because of market forces. When a product or commodity becomes more expensive, people either use less of it or switch to an alternative.

So the reality is that inflation may well subside over time, depending of course on what central banks do with monetary policy. Equally, pursuing degrowth could be inflationary or deflationary. It depends on whether the supply of goods and services falls further than the demand.

Both in the 1970s and today, one of the main issues is a fundamental misunderstanding of what economic growth is and what drives it. It is seen as being quantity driven, in the sense that degrowthers think there is an insatiable demand for more of the same, which will eventually have “devastating consequences for the living world”.

But economic growth is more about quality than quantity. It’s not just about producing more cars, for example, but about making them more fuel efficient or electric. This in turn creates demand for different resources, such as lithium for batteries.

Or to give another example of how economists view growth, one important study looked at how the price of a unit of light fell over time. This was because as technology shifted from candles to modern light bulbs, the cost of production in terms of hours worked fell dramatically.

Yet in another respect, the degrowthers are entirely right. Again, it’s worth looking back at the Limits report to understand this. To test their base case, the researchers looked at various alternative scenarios for how the future might pan out.

In one, they assumed that the world’s stock of available non-renewable resources doubled. This meant that scarcity was less of a problem than in their base case. But they predicted that, rather than averting catastrophe, this would instead cause damaging increases in pollution associated with economic activity.

Pollution has indeed become a bigger issue than resource constraints. For example, Limits predicted that CO₂ concentration in the atmosphere would reach 435 parts per million (ppm) by 2022 if trends in fossil fuel consumption continued unabated. It is currently 421ppm, so they were fairly close. It is this linkage between environmental harm and the economy that is the report’s most important legacy.

Managing the wealth of nations

After the Limits thesis, economists began incorporating the idea of finite resources more explicitly into models of economic growth. This formed the basis of the economic approach to sustainable development, which says that you achieve intergenerational equity by reinvesting the proceeds from finite resources into other assets like buildings, machines or tools.

For example, if US$1 of oil is extracted from the ground, US$1 should be reinvested elsewhere. Though still far from universally adopted, some oil-producing nations such as Norway do this.

A related idea is that we should move away from thinking about growth of national income and instead focus on managing national wealth. Wealth in this context refers to all assets from which people obtain wellbeing, and changes in wealth per capita – referred to in the field as “genuine saving” – are indicators of whether development is sustainable.

The key is to put the right price on different types of assets, including taking into account damage from pollution. For example carbon is clearly very important when valuing changes in wealth. The following chart uses our calculations to show an alternative to using GDP to measure progress over the 20th century.

How per capita ‘wealth’ changed over the 20th century

Rather than encouraging degrowth, it is now accepted by most environmental economists that this measure of human wealth is a useful complement to GDP. This is being taken increasingly seriously by governments. For example, the US recently announced it would start accounting for its natural assets.

But if we are to win the argument about changing the basis on which we measure human progress, it is vital that we are clear about the reasons for doing so. Believing that economic growth is inherently bad is not helpful.