Green streets: why protecting urban parks and bush is vital as our cities grow and become denser 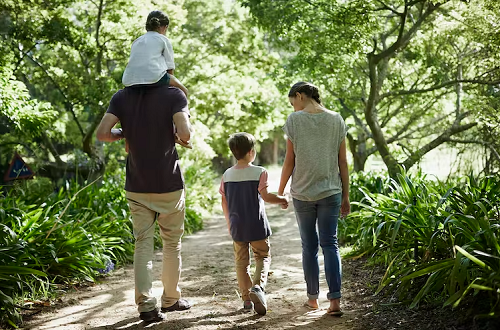 More than half of the world’s population lives in cities. In Aotearoa New Zealand, the proportion of people who live in towns or cities exceeds 86%. With our lives increasingly lived in urban environments, it’s vital for our personal wellbeing – and the planet’s – that city planners find ways to foster a connection with nature.

we cannot win this battle to save species and environments without forging an emotional bond between ourselves and nature as well – for we will not fight to save what we do not love.

In our recently published study, we explored the perceptions and experiences of nature that Hamilton residents had in their city.

Hamilton City Council is responsible for 1,142 hectares of open space, including more than 200 parks and reserves. In 2019, the council outlined its goal to have 80% of households with access to a park or open space within 500 metres of home.

Residents took us on tours of different green spaces around the city. During these visits, we asked them about the importance of these places, how they engaged with them and about their plant and animal encounters. We interviewed 21 residents – seven restoration volunteers, seven people who frequently visited bush parks, and seven who visited lawn parks.

We were particularly interested in how people perceived urban green spaces and the benefits they got from them. We also looked at the experiences and connection gained from different natural environments.

Kaelin was one of the Hamilton residents who took us on a tour of her garden and local park, one of Hamilton’s many branching gullies.

The gully was cool and quiet, the only sounds the murmurs of the tiny stream at its centre and the occasional indignant cheeps of our fellow fantail. As bell-like flutes punctuated by rude coughs and gurgles announced the presence of a tui, Kaelin turned to me with a delighted smile and said:

You can be down here in the right time of the year and you think, where am I? It’s not the city, it’s just ringing with birdsong.

Our interviewees described native bush parks as special places that provided a relaxing and restorative escape from city life. These green spaces, dominated by native vegetation, were the ones respondents commonly identified as places to sit peacefully and observe nature.

Lawn parks, on the other hand, acted more as “backdrops” for other activities – picnics, sports or farmers’ markets. Residential gardens, like bush parks, allowed for deeper observation and engagement with nature, but as private spaces, they didn’t provide the social benefits that parks do.

The value of diversity

Lawn parks are the most common type of green space in cities. Yet our study highlights that participants valued a diversity of green spaces that would meet a range of needs – their own, those of their community and those of other creatures such as birds, bats and weta.

Interviewees voiced a desire to have spaces in cities where unique New Zealand plants and animals could thrive. Respondents enjoyed sharing their parks and gardens with birds, bats and insects, recognising these animals contributed to the meaning of the place.

Creating habitat in cities for wildlife, however, was only one of the multiple
purposes of green spaces that respondents believed were important. They wanted to see a variety of parks that meet a range of community needs.

Just as respondents held multiple priorities for their own gardens, not always just as habitats for native flora and fauna, interviewees also wanted urban green spaces to support multiple uses and not serve exclusively as wildlife habitat.

The threat of densification

But the benefits of green spaces are threatened by the loss of parks and gardens to redevelopment and densification.

The council recently completed consultation on significant changes to density rules in Hamilton’s central city and surrounding areas. The plan will allow three homes of up to three storeys to be developed on most properties, though the council says it is committed to maintaining its public green spaces.

As urban populations continue to rise, our research supports a renewed call for the importance of reserving space for parks and nature in cities. Instead of being a dispensable luxury, green space is crucial for the health and wellbeing of both people and native species.

Finding ways to foster personal experiences of green spaces, and the plants, animals, people and stories that provide meaning, is one way to increase city dwellers’ emotional involvement with local nature. Such subjective bonds can spur the motivation required for people’s everyday actions to nurture and protect what they love.