NZ aid worker remains missing in Ukraine: the tragedy of people motivated to help in war zones becoming victims themselves 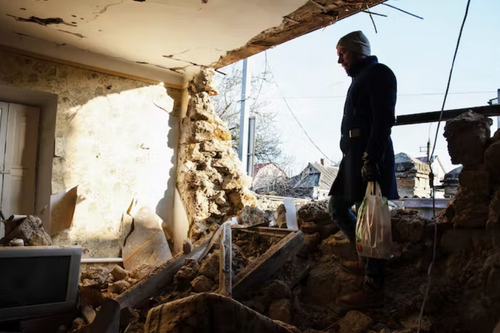 The humanitarian aid worker Andrew Bagshaw, who has dual New Zealand and British citizenship, has been missing in Ukraine for more than ten days.

Bagshaw and his British colleague Christopher Parry worked as part of a team of Ukrainian and international volunteers delivering aid and carrying out evacuations of civilians, often under fire from Russian forces. They have not been seen since January 6, when they left the city of Kramatorsk for Soledar, in eastern Ukraine, which has since been claimed by the Russian mercenary company Wagner.

Humanitarian volunteers often represent the best of us. They are driven to put themselves at personal risk with little financial reward to reduce human suffering and the impacts of conflicts. Their ethical justifications for entering dangerous locations, despite clear warnings from the Ministry of Foreign Affairs not to travel to Ukraine, are often exemplary.

But aid workers are at high risk. During the past two decades, intentional attacks on aid or humanitarian workers have become a disturbing trend, often perpetrated to drive outside influences away from war zones and fully isolate populations.

It is a war crime to intentionally attack aid workers. Some, such as personnel working for the International Committee of the Red Cross (ICRC) and the United Nations, have considerably more rights than others.

Despite this division, all aid workers are covered by basic rules. The problem is that international humanitarian law is not based on the ethics of why someone is in a war zone. This is especially the case if they are foreigners.

There are three main groups of foreigners who voluntarily go into war zones.

Some people volunteer to fight in foreign wars and are paid more than local fighters. If captured and deemed mercenaries, these people have no rights. They can be executed.

The second group are “aliens”, inadvertently caught up in a conflict in a country that is not theirs. For these people, if captured and non-combatants, they have a prima-facie right to leave the country. However, this is not an absolute right – they can still be held if their departure is contrary to the national interests of the state that captured them.

Aid workers represent the third group, and they are at increasing risk. Capturing aid workers for hostage and propaganda purposes is a repugnant trend. In recent conflicts, we’ve also seen a rise in the number of victims of collateral violence – their deaths were not intended but a result of indiscriminate force now commonly used in war zones.

More often that not, attacks on aid workers are a combination of intentional and unintentional actions. Globally, at least 460 aid workers were victims of major attacks in 2021: 140 were were killed, 203 wounded and 117 kidnapped.

Most of these attacks happened in countries such as South Sudan, Afghanistan, Syria and Ethiopia. But other conflict zones are also contributing to the figures, with growing numbers of deaths, kidnappings and wounding of aid workers recorded in Ukraine in 2022.

International humanitarian law is clear that if a country where a war is happening consents to the presence of aid workers and they are impartial in their work, they “shall be respected and protected”.

Although Russia has withdrawn its consent to the specific convention that contains this rule, Ukraine is a signatory. The obvious problem is that Russia now considers this annexed territory to be Russian, not Ukrainian.

Irrespective of debates about ownership and consent, Russia is still bound by other rules. Russia, like Ukraine, is a party to the Hostages Convention, which prohibits and criminalises the taking of hostages, for whatever justification.

Russia is also bound by the Security Council resolution, in which it strongly condemned all forms of violence against humanitarian workers. The council, including Russia, then urged states to ensure crimes against such personnel do not go unpunished.

Between theory and practice on the battlefield

Despite all of these rules and obligations, there is a large gap between the theory of restraint and the practices developing in Ukraine.

It is possible that Bagshaw and other humanitarian workers have been directly caught up in the violence in Ukraine. To be operating in a war zone, which involves the indiscriminate use of force, Somme-like conditions, the possibility of war crimes and the arrival of thousands of mercenaries who often pay scant regard to rules, is extremely risky.

It is also possible they have been taken for bargaining purposes. A practice is developing in Ukraine in which combatants and non-combatants, including foreigners, are taken and traded by the belligerents. These exchanges also include the bodies of the dead.

Whichever scenario applies, this is a tragedy. We are at a point where individuals with the highest ethical motivations to provide impartial humanitarian assistance have themselves become victims: collateral in a war being conducted without honour.