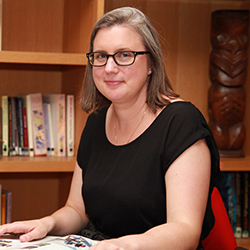 Fiona Haiko's last year at school was spent in Japan on a Rotary exchange, and that shaped her career.

She came to Waikato unsure whether to study sciences or languages, but after a year in the Bachelor of Science (Technology) programme, switched to a Bachelor of Arts and made Japanese her focus.

"I also did Politics as a supporting subject, and took Chinese. I was focussed on developing a career that would enable me to work internationally, with languages and international relations in particular."

While she was studying at Waikato, Fiona was awarded a Japanese Government Language and Culture scholarship to study for a year at one of Japan's top language universities. That really boosted her language skills, and with her Waikato BA complete, Fiona went on to graduate in Japan with a master's degree.

Now, based at the New Zealand embassy in Tokyo, Fiona is speaking Japanese every day as she promotes New Zealand education throughout Japan.

"I'm working with students, their families, schools and education agents and government officials. I keep people up to date with New Zealand's international education objectives, and also make sure that New Zealand institutions are aware of what's happening in Japanese education and what that market is seeking", says Fiona.

"Waikato gave me a good quality degree, and provided the foundation for me to build my career. Just as important, I enjoyed my years at Waikato and made some great friends."