Joanna has done it all.

A single mum before starting university, Joanna studied natural therapies before deciding to further her interest in anatomy and physiology by enrolling in a Bachelor of Science at Waikato.  She then moved to anthropology, completing a graduate diploma and Masters, finishing off with a PhD in history.

After her Bachelors, Joanna travelled to Antarctica with Waikato’s Biological Sciences Antarctica Research Division and spent three months doing experiments on moss species in the Ross Sea region. “This was one of the most exciting and life-changing experiences I have ever had, and I’ll be forever grateful for the experience,” she says.

She then worked as a groundskeeper at Hamilton Zoo, a mortuary technician at Waikato Hospital and as a wellness professional at a women’s health retreat – but was craving more.

“After a couple of years I knew I wanted to return to study so I enrolled in a Masters, which then led to a PhD in medical and environmental history.”

Initially choosing her subjects out of interest, Joanna soon learnt she was gaining a wide perspective on the subject of medical history and the use of medicinal plants in colonial medical culture – so it became the subject of her doctoral thesis.

In 2016, Joanna will go to Vietnam to work with the Social Policy Ecological Research Institute (SPERI), an NGO committed to reserving the land and cultural rights of ethnic minorities in Vietnam and the surrounding Mekong area. She’ll work as an ethnobotanist alongside a group of traditional healers, learning and recording their use of medicinal plants.

“The skills I learnt at Waikato will forever be in my repertoire and will, I believe, take me further afield in to a new and exciting chapter of my life.” 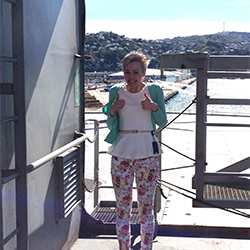