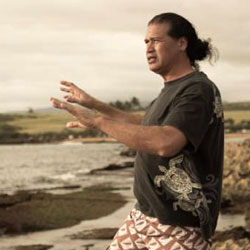 Have you ever wondered what Gollum or Gandalf would sound like speaking Hawaiian? Thanks to Keao NeSmith, you won't have to much longer. The Waikato alumnus has just translated J.R.R Tolkien's The Hobbit into Hawaiian – Ka Hopita.

"Ka Hopita is a project I did for fun," Keao says. "It was a way of relaxing after coming home from work, like how you might do a crossword puzzle to wind down. Translating The Hobbit was like that for me."

To put that into perspective, Keao says Ka Hopita is the same length as his doctoral thesis - about 100,000 words.

Keao was raised in Kekaha on the island of Kaua'i, speaking mostly English. At high school, he chose to study Japanese, and it wasn't until he attended the University of Hawai'i at Hilo that he began to formally study his native language following years of speaking it with his family and in his hometown. He later received a US Mellon - Hawai'i Fellowship to study at the University of Waikato where he completed his PhD in applied linguistics at the School of Māori and Pacific Development and graduated in 2012.

Keao says Hawaiian is one of the most endangered Polynesian languages, and his doctoral research focused on how the Hawaiian language is being conveyed to a new generation of speakers.

Keao aimed to use his PhD research as a starting point to develop a professional teaching programme to revitalise the struggling Hawaiian language. He's now teaching his language at the University of Hawai'i at Mānoa in Honolulu.

He says picking up a copy of Ka Hopita to read is something learners can do as part of the process of becoming a fluent speaker of Hawaiian. He also recommends watching the films attached to a translated book, such as The Hobbit, because it helps provide a fuller picture not otherwise gained if the reader is still learning the language of the translated version. "The films help to understand the story, so you can constantly return to the book to help strengthen your proficiency in Hawaiian."

He had some work on his hands when it came to translating Tolkien's mythical world.

"There's no real Hawaiian equivalent for 'hobgoblin' or 'goblin', which Tolkien uses in The Hobbit but stopped using in The Lord of the Rings trilogy - he uses 'orc' instead. So I went for an Hawaiianised version of 'orc', 'oaka', for Ka Hopita, and 'oaka nunui' for 'hobgoblin', which, according to Tolkien, means 'big orc'.

Ka Hopita is due out, fittingly, on March 25 - which is the date all of the rings were destroyed in the final Lord of the Rings book, The Return of the King, marking the end of the hobbits' adventures.

The Hobbit isn't the first literary translation Keao has completed in Hawaiian, and he hopes it's not the last. He translated Alice's Adventures in Wonderland for Evertype, an Irish publishing company that specialises in literary translations for lesser-spoken languages, and was approached by them to translate The Hobbit.

Evertype has also published translations of Alice's Adventures in Wonderland in Samoan and Tongan, and a Māori version will be published soon, translated by the University of Waikato's senior lecturer in te reo, Tom Roa.

The future of Hawaiian

While the future of traditional Hawaiian - which Keao speaks and is an advocate for - is uncertain, Keao says translating classics into Hawaiian gives the language more prestige and exposure.

"Books like these help our language. When they're published, they generate interest and attract attention to the language - which is a good thing," he says.

Keao is also working on a project with his former PhD supervisors at the University of Waikato, Associate Professor Winifred Crombie, Dr Hēmi Whaanga and Dr Diane Johnson, on a Hawaiian language textbook for young learners.

He's hoping to return to Waikato for a visit soon, but thinks he'll leave it to the summer months. "I absolutely love Waikato - it's a great place with very professional staff and a supportive atmosphere...but it's just a bit too cold for me in the winter." 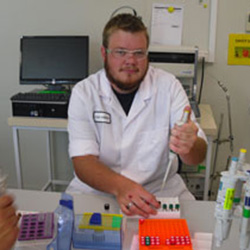 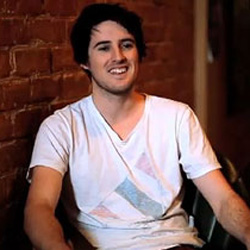