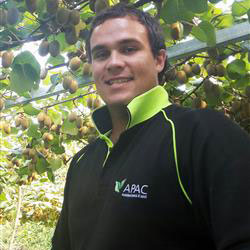 Ruan Nunes loves being able to work outdoors all summer as the manager of several kiwifruit orchards in Opotiki.

As well as overseeing the orchards to ensure the plants perform at their optimum, Ruan supervises packing shifts at harvest time, as well as the grafting and planting of new kiwifruit varieties in winter.

“My Bachelor of Management Studies with Honours degree at Waikato gave me the confidence to believe in myself and the decisions I make,” says Ruan.

“I believe that to be successful as a manager, it is essential to communicate clearly and understand what motivates your staff and colleagues. I find horticulture particularly enjoyable, as I like the challenge of identifying potential actions and ideas that could result in a higher level of sustained production.”

Of South African heritage, Ruan attended Thames High School and is proud of what he has already achieved in his job. Before graduating from his BMS(Hons) degree with first class honours, he worked part-time from the age of 15 to 20 as a machinery operator for EastPack, which gave him hands-on experience in all areas of the kiwifruit business.

Ruan says he enjoyed his whole university experience at Waikato; “from the nervous excitement you feel during an exam, to the mentally simulating discussions during lectures and tutorials.”

One of his most memorable moments was taking out the top prize in the Waikato Management School Case Competition in 2012, with his team’s expansion strategy for a local craft beer brewery. This included targeting female consumers with a beer-flavoured ice cream, and using high-end supermarket outlets to reach the Auckland and Tauranga markets.

Ruan’s words of wisdom to students considering university are this: “Study subjects that you are passionate about. This will ensure you are more involved and motivated.” 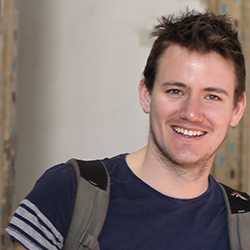