Instructions: Follow the tabs to improve your reading comprehension and vocabulary development.

Some toxic substances exhibit persistence, bioaccumulation, and biological magnification. These substances include certain pesticides (such as DDT, or dichlorodiphenyl-trichloroethane), radioactive isotopes, heavy metals (such as lead and mercury), flame retardants (for example, PBDEs, or polybrominated diphenyl ethers), and industrial chemicals (such as dioxins and PCBs, or polychlorinated biphenyls).

The effects of the pesticide DDT on many bird species first demonstrated the problems with these chemicals. Falcons, pelicans, bald eagles, ospreys, and many other birds are sensitive to traces of DDT in their tissues. A substantial body of scientific evidence indicates that one of the effects of DDT on these birds is that they lay eggs with extremely thin, fragile shells that usually break during incubation, causing the chicks’ deaths. After 1972, the year DDT was banned in the United States, the reproductive success of many birds improved.

Three characteristics of DDT contribute to its impact on birds: persistence, bioaccumulation, and biological magnification. It takes many years for some pesticides to break down into less toxic forms. The persistence of synthetic pesticides is a result of their novel (not found in nature) chemical structures. Natural decomposers such as bacteria have not yet evolved ways to degrade many synthetic pesticides, so they accumulate in the environment and in the food web.

When a pesticide is not metabolized (broken down) or excreted by an organism, it is simply stored, usually in fatty tissues. Over time, the organism may bioaccumulate, or bioconcentrate, high concentrations of the pesticide.

Organisms at higher levels in food webs tend to have greater concentrations of bioaccumulated pesticide stored in their bodies than those lower in food webs. This increase as the pesticide passes through successive levels of the food web is known as biological magnification, or biological amplification.

As an example of the biological magnification of persistent pesticides, consider a food chain studied in a Long Island salt marsh that was sprayed with DDT over a period of years for mosquito control: algae and plankton → shrimp → American eel → Atlantic needlefish → ring-billed gull. The concentration of DDT in water was extremely dilute, on the order of 0.00005 part per million (ppm). The algae and other plankton contained a greater concentration of DDT, 0.04 ppm. Each shrimp grazing on the plankton concentrated the pesticides in its tissues to 0.16 ppm. Eels that ate shrimp laced with pesticide had a pesticide level of 0.28 ppm, and needlefish that ate eels contained 2.07 ppm of DDT. The top carnivores, ring-billed gulls, had a DDT level of 75.5 ppm from eating contaminated fishes. Although this example involves a bird at the top of the food chain, all top carnivores, from fishes to humans, are at risk from biological magnification. Because of this risk, currently approved pesticides in the United States have been tested to ensure they do not persist and accumulate in the environment beyond a level predetermined to be acceptable.

Compare your understanding of the last paragraph to the diagram in the next tab.

Does this match what you had in your mind when reading the last paragraph? 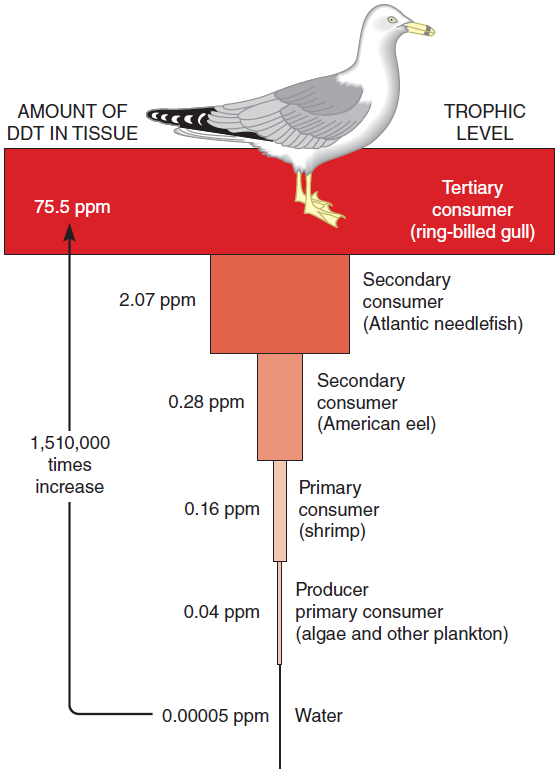