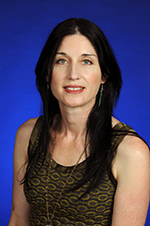 Lisa’s interests include animation, cultural studies and transmedia, with an emphasis on the relations between audio and visual media, popular music, music video and the avant-garde. She is co-editor, with Holly Rogers and Carol Vernallis, of the Bloomsbury book series New Approaches to Sound, Music and Media, and the collected volume Transmedia Directors: Artistry, Industry and New Audiovisual Aesthetics (2019). Lisa is also co-editor, with Ana Cristina Mendes, of the Routledge book David Bowie and Transmedia Stardom (2019) and the Celebrity Studies journal issue Navigating with the Blackstar: The Mediality of David Bowie (2019). Having recently published pieces on The Animated Music Videos of Radiohead, Chris Hopewell and Gastón Viñas (Bloomsbury, 2019) and Majid Adin’s animated music video for ‘Rocket Man’ (MSMI, 2019), Lisa is currently writing a book on the music videos of David Bowie.

Perrott, Lisa (2015) ‘Bowie and Gender Transgression – What a Drag’. The Conversation, Australia: https://theconversation.com/bowie-and-gendertransgression-what-a-drag-44569

With an emphasis on integrating creativity and criticism, Lisa's teaching is also informed by her editing and publishing experience including her current research. Her interests include:

Lisa also has several years experience as an external examiner, and has undertaken degree accreditation and monitor duties for NZQA and various tertiary institutions.

As Programme Convener for Screen and Media Studies and Arts Advisor for the Sir Edmund Hillary Scholarship Programme, Lisa is happy to discuss the application process with potential applicants. https://www.waikato.ac.nz/about/hillary/

Lisa is a member of the University of Waikato Audience Research Unit: http://www.waikato.ac.nz/fass/research/centres-units/aru