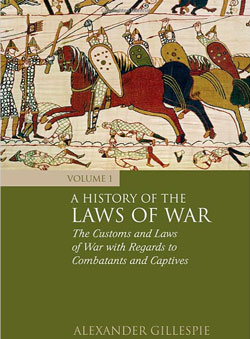 A history of the laws of war: Volume 1

The Customs and Laws of War with Regards to Combatants and Captives.

This unique reference traces the origins of the modern laws of warfare, from the earliest times to the present day. Relying on written records from as far back as 2,400 BC, and utilizing sources ranging from the Bible to Security Council Resolutions, the book pieces together the history of a subject which is almost as old as civilization itself. A History of the Laws of War shows that as long as humanity has been waging wars, it has also been trying to find ways of: a) legitimizing different forms of combatants and ascribing rules to them, b) protecting civilians who are either inadvertently or intentionally caught up between them, and c) controlling the use of particular classes of weapons that may be used in times of conflict. Thus, the book is divided into three substantial parts: Volume 1 on the laws affecting combatants and captives, Volume 2 on civilians in times of armed conflict, and Volume 3 on the law of arms control. As a work of reference, A History of the Laws of War is unrivaled and will be of immense benefit to scholars and practitioners researching and advising on the laws of warfare. It throws fascinating new light on the history of international law and on the history of warfare itself. The volumes can be purchased individually, or as a complete three-volume boxed set.

These three slim volumes are a labour of love. They are the result of prodigious research into the history of many wars fought from ancient times.It is a work that is easy to read because it is written with great clarity and personal idealism. It will remain an important resource for researchers in this field of the law.
M. Sornarajah, Singapore Journal of Legal Studies

The wealth of materials compiled and reviewed by Alexander Gillespie for the purpose of this book is breath-taking and one can suspect that Alexander Gillespie's books will become the mandatory starting point for anyone wishing to study the history of the laws of war in the future.
Vincent Roobaert, NATO Legal Gazette, Issue 27

...libraries and professors who focus on the many elements of the [law of war] would be wise to have all three volumes at hand. Together, they provide a vivid, detailed, and especially readable account of the [law of war]. This set is destined to be described by all holders as a richly adorned, and affordable, research treasure trove.
American Society of International Law Newsletter, Issue #43

Unique and of unquestionable relevance. both works are appreciable for the impressive quantity of the historical and legally pertinent materials gathered by the author. This is useful from the perspective of understanding the background of today's rules on the recourse to armed force and international humanitarian law.
Carlo Focarelli, Italian Yearbook of International Law, Volume 23, 2013