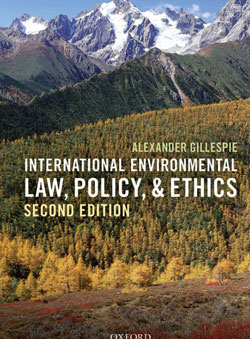 This second edition of International Environmental Law, Policy, and Ethics revises and expands this groundbreaking study into the question of why the environment is protected in the international arena. This question is rarely asked because it is assumed that each member of the international community wants to achieve the same ends. However, in his innovative study of international environmental ethics, Alexander Gillespie explodes this myth. He shows how nations, like individuals, create environmental laws and policies which are continually inviting failure, as such laws can often be riddled with inconsistencies, and be ultimately contradictory in purpose. Specifically, he seeks a nexus between the reasons why nations protect the environment, how these reasons are reflected in law and policy, and what complications arise from these choices.

This book takes account of the numerous developments in international environmental law and policy that have taken place the publication of the first edition, most notably at the 2002 World Summit on Sustainable Development and the 2012 'Rio + 20' United Nations Conference on Sustainable Development. Furthermore, it addresses recent debates on the economic value of nature, and the problems of the illegal trade in species and toxic waste. The cultural context has also been considerably advanced in the areas of both intangible and tangible heritage, with increasing attention being given to conservation, wildlife management, and the notion of protected areas. The book investigates the ways in which progress has been made regarding humane trapping and killing of animals, and how, in contrast, the Great Apes initiative, and similar work with whales, have failed. Finally, the book addresses the fact that while the notion of ecosystem management has been embraced by a number of environmental regimes, it has thus far failed as an international philosophy.

Review from previous edition: "... a short but incisive review of the foundations of international environmental law ... Gillespie is impressive in his use of a plethora of international environmental conventions, declarations and statements to support his arguments. ...thought-provoking ... raises questions about IEL which to date have rarely been seriously addressed ..."
Lawyers Weekly June 2001

"a very interesting and well-written work...this study can contribute to a better understanding of the issues raised in choosing the 'best' means to protect the environment."
Edward H.P. Brans/REC/EL vol 8 issue 2 1999