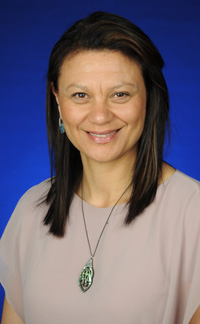 Linda Te Aho is of Ngāti Korokī Kahukura and Waikato-Tainui descent.  Linda researches and teaches Māori and Indigenous legal issues at Te Piringa Faculty of Law.  In 2014 Linda was appointed to provide expert technical advice on the proposed reforms to Te Ture Whenua Māori 1993 (the Māori Land Act), and chaired the Māori Legal Forum.  Linda was appointed by her iwi of Waikato-Tainui as a guardian mandated under the 2010 settlement for the co-management of the Waikato River ecosystem to develop the long term vision for its holistic restoration.  In November 2014, with Betsan Martin, Linda co-chaired the Symposium on Law, Ethics and Responsibility at the Waikato-Tainui College for Research and Development leading interdisciplinary engagement on new ideas for the governance of freshwater and other areas of public interest, such as climate, based on responsibility.  Linda serves as a lead negotiator for Ngāti Koroki Kahukura Treaty Claims and provides specialist advice on Treaty of Waitangi claims and Post-Settlement Governance issues to iwi and hapū organisations and technical advice on Māori legal issues in relation to lands and freshwater to Iwi Leaders, toCrown agencies and government departments.