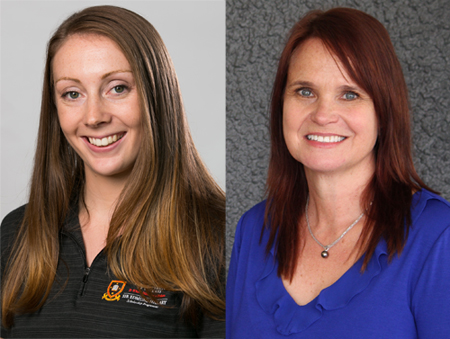 Two University of Waikato law students have won judge's clerk positions at the Auckland High Court. One's a young thespian, the other a former second language teacher, education administrator and mother of one.

Natalie Foster and Angela Vanderwee are two of six law students from around New Zealand selected for a two-year term in Auckland, beginning in January next year.

A former Fairfield College student, Natalie is a Waikato University Sir Edmund Hillary Scholar studying for a BA/LLB at Waikato. She'd been at summer school in China and was on student exchange in the Netherlands when she was asked to apply for the judge's clerk position, which she did over the phone. Clearly she interviewed well.

"It seemed liked a cool opportunity. I don't know what area of law I want to go into, and I thought the clerk's position would be a good way to find out about different areas," Natalie says.

As a Hillary scholar at Waikato, Natalie has her course fees paid and gets extra coaching and leadership opportunities in her performing art. She's appeared on stage in many productions and will be working behind the scenes as assistant stage manager in a production celebrating 10 years of Hillary scholars.

She likes the theatre-law combination. "I chose to study law because I love language and debate, yet it can also be quite logical and mathematical, so it provides opportunities for logic and creativity."

Neither Natalie nor Angela know which judges they'll be working with.

Angela already has a bachelors degree in education, a teaching degree, and a Masters of Educational Management. She has spent most of her adult life living off shore, teaching English and also holding managerial positions in universities in Spain and Dubai.

"But it was while I was living in the US, doing project management work that I started to think about studying law.  I have always been interested in social justice and law and society and I knew my language, research and teaching experience would all feed into any law study I undertook."

Coming from Auckland originally, Angela thought that's where she'd be studying, but after looking around, she chose Waikato. "It was the diversity, the different cultures and the different ages of the students that appealed to me.  Looking back, it was a huge gamble, but it's paid off and been a fantastic journey, especially as I've met some wonderful people."

This year Angela has been tutoring Crimes and Equity papers, and it's been a bit of a juggling act fitting study and tutoring around the needs of her family. "I have to keep on top of my workload all the time, take every opportunity to do my readings and assignments, even if that's at my son's swimming lessons. I have become very good at prioritising and fitting in my other needs around that," she says.

While Natalie will be moving to Auckland in the new year, Angela has chosen not to uproot her family and will commute between the two cities.