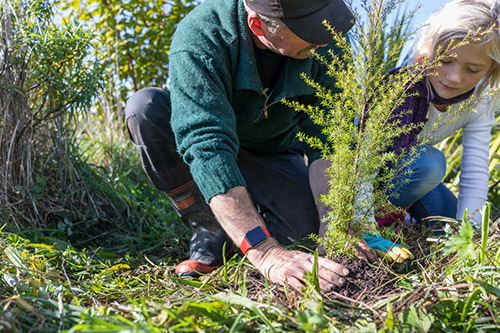 In New Zealand, indigenous biodiversity is at crisis point with more than 4000 species either threatened or at risk. Worldwide, up to one million species on Earth are threatened with extinction, many within decades, according to the United Nations.

One solution to the biodiversity crisis is bringing indigenous nature back into cities and urban communities. This is more important than ever, since the Covid-19 pandemic has seen people locked down and stuck at home, looking to nature in their local environment for mental health and wellbeing.

With levels of anxiety and depression increasing worldwide, spending time in these natural outdoor sanctuaries is important to human health and restoring mental wellbeing.

The project, which was funded by the Ministry of Business, Innovation and Employment (MBIE), has four interconnected aims: to increase native biodiversity in urban neighbourhoods for the benefit of both people and nature; to restore urban wildlife and native fauna such as birds and lizards while reducing the impact of introduced predators; restore health-promoting soil biodiversity and investigate the links between human exposure and health; and to develop a framework for empowering local Indigenous knowledge for ecological restoration.

This research has had a huge impact and transformed urban spaces around New Zealand, supporting the ecological efforts of councils and communities in Waikato, Hawkes Bay and Taranaki.

Since 2004, the 65.5 hectare council-owned site has been transformed from farm paddocks into an internationally acclaimed regenerating native forest, wetland and a lake ecosystem rich in biodiversity.

Professor Clarkson is internationally regarded, and was on the expert panel that worked on the indicators for City Biodiversity Index – a self-assessment tool for cities to evaluate and monitor the progress of their biodiversity conservation efforts. The Index featured Hamilton, the only New Zealand city included in the global report.

Hamilton City Mayor Paula Southgate said that Professor Clarkson was “a taonga (treasure) for our city” and has helped encourage the Council’s increased commitment to environmental sustainability, native planting and biodiversity in the Nature in the City Strategy and the Long Term Plan.

“New Zealand’s biodiversity is under great threat and still is. If it wasn’t for people like Bruce, we’d be in a worse situation,” said Mayor Southgate.

Professor Clarkson is passionate about sharing his knowledge, whether it's with school children, PhD researchers or the global community. He is chair of the Australasian chapter and a board member of the International Society for Ecological Restoration, and is ambassador for the New Zealand's Biological Heritage National Science Challenge.

In 2006 he was awarded the Loder Cup, New Zealand's premier conservation award and in 2016 he received the Royal Society of New Zealand Charles Fleming Award for environmental achievement.

Greening our cities is licensed under a Creative Commons Attribution 4.0 International License.