The coolest job in the hottest room at the University

“Not a problem,” is often heard from Steve Newcombe as he interacts with staff and students in the hottest room at the University of Waikato – the glassblowing room.

For nearly 30 years, the University’s Advanced Technical Officer has engineered glass equipment that can’t be bought. One of only 12 scientific glass blowers in New Zealand, Steve is a rarity and a key employee of the University.

He can drill, mill, mould, grind, polish, cut and manipulate glass, and it seems there is no project he can’t do. Scientists and students go to his workshop in F Block with an idea for a project that needs specialised equipment, and Steve will set to work with the plan in his head, already visualising the end product.

The process of creating glass objects involves using 1600-degree heat from the gas burners on his workbench, and the bigger the object, the bigger the flame. Steve uses carbon tools, tweezers and his eye to measure as he manipulates and twists the glass over the flame.

“The glass is strong, don’t ever let anyone tell you otherwise,” he says as he manipulates the glass tubes.

When Steve needs to expand the glass, he connects a tube and blows air into it, moulding the glass into the desired shape. It is this process he has used to create his many prize-winning pieces.

Steve also keeps on top of the design and maintenance of Te Aka Mātuatua - the School of Science's radiocarbon vacuum lines, a complex system used in radiocarbon dating processes which have metres of glass tubing created in Steve’s workshop. The carbon dating vacuum lines are in constant use, dating items such as shell and kauri or even human skull. On one occasion, the Australian police commissioned the lab to test a skull as part of an investigation into a cold case.

Steve says his passion for glassblowing began during a high school science class.

“When I was at high school, our science teacher said, ‘we’re not going to do any chemistry today, we’re going to blow a piece of glass’ and we all blew a piece of glass on a Bunsen burner and I thought it was so cool and from that day on I wanted to be a glassblower.”

After high school, Steve worked as a communications technician and tinkered at home in the garage creating artistic glass objects like ships and swans. He later travelled to Holland on an OE with his wife, where he was trained as a scientific glassblower. On his return to New Zealand, he obtained his formal training at the Department of Scientific and Industrial Research (DSIR) in Wellington.

In addition to his scientific work, Steve enjoys artistic glassblowing. In his office is a trophy-laden shelf with awards from international symposiums. When referring to the trophies he modestly, almost surprisingly, says, “I seem to win a lot of awards.”

One of these was for the engineering of an artificial mouth. The first model was made in 1991 for Wellington Hospital with the technology now owned and used at a university in Hong Kong. The design creates an environment that mirrors a mouth with multiple test points to test the growth of plaque and measure teeth decay dependent on exposure to various substances.

Steve says he gets a kick out of helping people. “It doesn’t matter what the client wants, whether it is simple or complicated, I get the buzz by making something that works.”

He says he enjoys creating what is needed for the University’s students and staff. “That's what my job is, actually satisfying the needs of those who walk in the door.”

The coolest job in the hottest room at the University is licensed under a Creative Commons Attribution 4.0 International License. 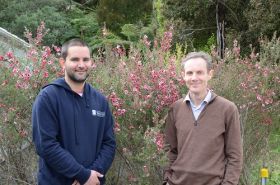