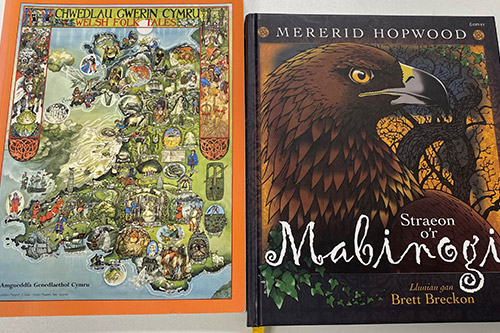 A project looking at the similarities between how Māori and Welsh children keep traditional stories alive through oral storytelling is the focus of a collaboration between the University of Waikato’s School of Education and Cardiff University in Wales.

The international collaboration builds on a formal strategic partnership between the two universities, announced last November.

“We’re really excited about the possibilities,” says Dr Bateman. “This project fits within the language, culture and arts that was emphasised at the signing.”

Welsh-born Dr Bateman gained her PhD in 2010 from Swansea University and was appointed to Waikato University’s School of Education the same year.

She has led a number of research projects in Wales and New Zealand and was the principal investigator on a project about young children’s storytelling expertise, funded by the Ministry of Education's Teaching and Learning Research Initiative.

The team is applying for seed funding from the Cardiff-Waikato strategic partnership for their research, which will begin the first of three phases over a five-year period. Later stages of the proposed research involve working with early childhood education services on stories, practices and pedagogies, language, philosophies and worldviews.

During an online trial last year, Dr Bateman worked with Dr Gisselle Tur Porres, lecturer and programme director of Early Childhood Studies at Swansea University’s Department of Education and Childhood Studies, to successfully deliver a paper to the two groups of students.

“We plan to do it again this year with a new cohort of third years,” she says.

The third-year paper focuses on being “an agent of change in early childhood”.

Delivered towards the end of their degree programme, the paper looks at culturally responsive teaching and how the curriculum in both Wales and New Zealand supports bicultural belonging and diversity from a socio-cultural approach.

“Since I moved to New Zealand nearly 12 years ago, I’ve been struck by the similarities between the two countries,” says Dr Bateman.

In addition to a love of rugby, the two countries share a passion for nurturing and promoting everyday use of their Indigenous languages - Māori and Welsh.

Early childhood educators have a crucial role to play in that, she says.

“This work I’m doing with Cardiff and Swansea universities is a natural extension of that. The possibilities and opportunities here for global early childhood education, and education more generally, are very exciting.”

Working with internationally recognised academics in education research has been a highlight of these collaborations for Dr Bateman.

She says that Professor Emerita Davies from Cardiff University is “legendary” in international education circles for developing Wales’s political and literary progress with traditional Welsh storytelling.

Head of the School of Welsh for 20 years, Professor Davies stepped down in 2017 and is now an Emerita Professor at Cardiff. Her special interests are the interplay between orality and literacy, together with the performance aspects of medieval Welsh narrative.

Similarly, Dr Tur Porres from Swansea University is well connected, and has coordinated research projects in Belgium, Ecuador and Uruguay. Her teaching interests include how to work effectively with children, families and communities.

International connectedness is a key part of the University of Waikato’s history and vision, enriching staff and student experience, improving learner success and research performance. Collaborative Online International Learning (COIL) is an opportunity that the University embraces, with opportunities for students to interact with their international peers and collaborate with people from a diversity of cultures and backgrounds.

Kiwi and Welsh universities collaborate to bring stories and students together is licensed under a Creative Commons Attribution 4.0 International License.