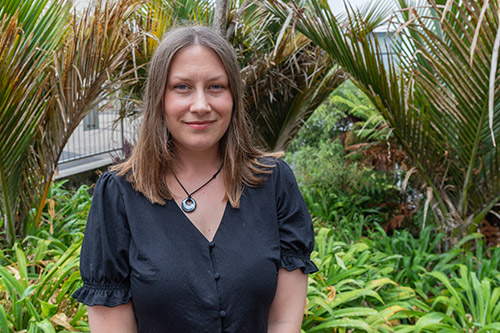 Experienced supervisor Dr Andreea Calude, a senior lecturer and Linguistics convenor at Waikato University, supported her in this timely research.

While research into this type of language – directives – is not new, a study of directive use in naturally occurring social media language is.

The project provided a valuable opportunity to experience linguistics’ research in a fun and safe environment.

“It can be quite intimidating when you are beginning your first research project. This was an exploratory study, so sifting through tweets without being sure what I would find was overwhelming at times.

“That was where being able to turn to my supervisor was so helpful. In the end, realising that we’d found some cool patterns that could contribute to the field was such an amazing feeling.”

Jessie’s work involved analysing 1001 tweets, separating out directive clauses, and coding them for stance towards Government Covid-19 measures before further examining which linguistic features tweeters used to formulate their directives.

Once she completed the coding process, she then compared the coded language features found in directive tweets against their stance towards Government measures.

The most salient linguistic features included politeness strategies and chosen grammatical construction, while a range of additional discourse features (such as vocative noun phrases, expletives, and Māori loanwords) helped generate a more detailed image of the data.

Jessie used this data to uncover several larger patterns of language use. One such pattern was the preference shown by all stance groups for direct, bald on-record imperatives (such as ‘Stay home!’).

Tweeters used this strategy the most in tweets supportive of Government measures. As the most prominent stance group, and therefore representative of the status quo, these users tended to avoid mitigating strategies in favour of blunt, direct commands more likely viewed as rude in face-to-face conversation.

In contrast, tweets calling for stronger Government measures tended to use the most indirect, polite approaches, but were simultaneously the most likely to use vocative noun phrases to call out specific individuals or organisations – those who they felt were able to best respond to their demands.

This summer research project has since grown into a full paper currently under review and has continued to shape Jessie’s current work.

As a Master’s student completing a degree in English, she utilises an interdisciplinary Medical Humanities approach drawing on both English and Linguistics to further investigate aspects of public engagement with Covid-19 on Twitter.