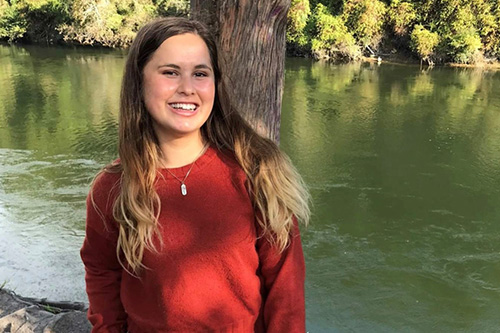 Sophia Harrison, former head girl at Melville High School, a participant in the nationwide Tuia Rangatahi leadership programme and Bachelor of Social Sciences graduate, has her University of Waikato Summer Research Scholarship to thank for setting her on the road towards becoming a clinical psychologist.

Sophia (Ngāti Rongomaiwahine, Ngāti Kahungunu, Ngāti Porou) came to Waikato from high school to study for a Bachelor of Social Sciences with majors in Māori and Indigenous Studies and Geography. In her second year she applied for and was awarded a Summer Research Scholarship.

She worked in Te Pua Wānanga ki te Ao Faculty of Māori and Indigenous Studies with lecturer Hineitimoana Greensill, researching Māori and Pacific approaches to sustainability. Her findings would contribute to the third-year paper Sustainability in Māori, Pacific, and Indigenous Contexts.

“The paper already had a strong Māori and North and South American – First Nations focus and I thought it was important to strengthen the Māori perspective even more and also increase Pacific and Indigenous Australian perspectives in the paper. But particularly Māori voices as tangata whenua,” says Sophia.

Her research focused on audiovisual rather than academic texts, coming to her subject from a more creative perspective, including poetry, art and creative media. She already had a lot of information on Indigneous activists and “I kind of went from there”, she says.

Sophia could do a lot of her research from home, but she preferred to come to campus where she worked alongside other young Māori researchers and long-admired academics.

“And they were all wāhine pursuing these careers and doing research, and I thought, ‘I can be like you’.”

She enjoyed that experience so much she asked her supervisor if there was something else she could do in the research field during her final year.

Sophia was taken on as Ms Waitoki’s research assistant, and by the end of the year she was hooked on psychology.

In 2022 Sophia is going to Otago to study for a Graduate Diploma in Psychology and believes it’s thanks in part to her summer research scholarship that she became interested in pursuing clinical psychology.

While there may not be any obvious link between Māori and Indigenous studies and Psychology, Sophia thinks her previous study will be useful in providing context and much needed perspective.

Her Human Geography major had a health perspective, focusing on space, identity and their impacts on health and wellbeing – “the postcode influence” on people and communities.

Overall, Sophia says her university study to date, but her summer research in particular, has increased her appreciation of the whakapapa relationship between people and the environment.

“As Māori we call ourselves tangata whenua – people of the land, but how many of us are actually people of the land and people for the land? Are we being good whānau members to the whenua and environment?” she says.